Mariners Fall to 58-82 in Loss to Angels

Share All sharing options for: Mariners Fall to 58-82 in Loss to Angels 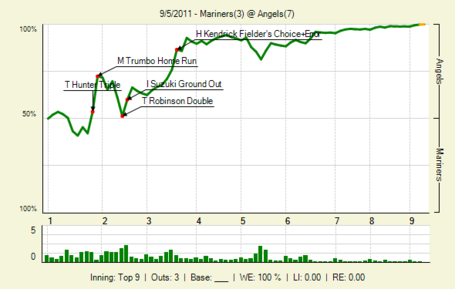 It's easy to slag on Anthony Vasquez in this game, but he threw 98 pitches and of the 42 swings the Angels took against him, eight missed for an 81% contact rate which is slightly better than average. Of the 21 balls put in play, only two were classified as line drives (though Anaheim has a scoring bias that diminishes line drive calls) and he induced five pop ups. The home run surrendered to Mark Trumbo was hit on a pitch around Trumbo's mid-shins. Vasquez obviously could have pitched better, but do not discount the unlucky breaks he got from the defense tonight and that he have to face nine right-handed hitters. I'm not claiming Vasquez pitched a hidden gem, but it's not the worst outing either.