Mariners Designated Hitters Throughout the Years

Share All sharing options for: Mariners Designated Hitters Throughout the Years

It's extraordinarily great that Mike Carp might be a player who could fill the DH slot adequately for a time being. I'd be surprised if he went on to have a long lasting career there, as it takes a rather large margin of error in hitting ability to be able to survive year after year as a DH, but I've been surprised before. Mike Carp's current success is far more than I would have thought probable a year ago. The bonus is that this does not seem like a Jose Vidro in 2007 situation where there was no way to believe in the end product. Even though Carp's BABIP is much higher than Vidro's was in 2007, Carp's is less ridiculous feeling thanks to his real power. 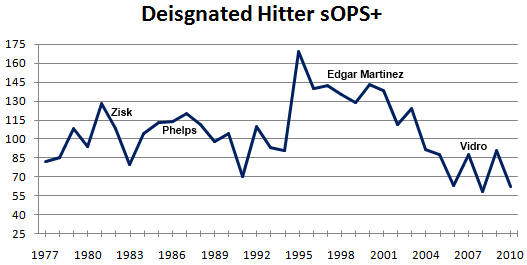 Ken Phelps was drafted four times. Back in an era that had a January and June draft, he was taken in the first round of both in 1974, first by the Yankees and then by the Phillies but neglected to sign with either. He had been selected two years prior in the 8th round by the Braves and refused that as well. Finally in 1976 he signed after being a 15th round pick of the Royals. Overshot it a bit there, Ken.

Half a dozen years later he would be traded to the Royals and a year after that picked up by the Mariners. Phelps was in his age-28 season and up to then had a total of 36 Major League plate appearances. Phelps had been destroying Triple-A baseball for a while. He played a whopping 507 games there and left with a 1.049 OPS so it's not such a huge shock that he was a productive hitter with the Mariners in his phsyical peak.

What we remember him for though is the trade that brought Jay Buhner to Seattle. It happened near the trade deadline in 1988 while Phelps had a year and a half left before free agency. The Yankees had signed Jack Clark just that season and he was their primary DH. Ken Phelps seemed a bit redudant for a at the time 5th-place team, but did they surrender a lot. We know what Buhner became, but back in 1988 his numbers weren't off the charts or anything. He was posting roughly the equivalent of a 110 OPS+ in Triple-A and while certainly promising given his age and rapid advancement, that's hardly the numbers of a can't-miss. He certainly worked out though.