Mariner Right Fielders Throughout the Years

Share All sharing options for: Mariner Right Fielders Throughout the Years

This is the Bone Yard and Area 51. Since the 90s began, the Mariners have used practically just two right fielders, Jay Buhner and Ichiro Suzuki. There was the year of Jose Guillen and there was the bits of Henry Cotto and Greg Briley, but the team has played 5,545 games as a franchise over 36 seasons and Buhner and Ichiro combine for 2,797 starts in right field. Over half the Mariners games ever has had one of those two players starting in right field. 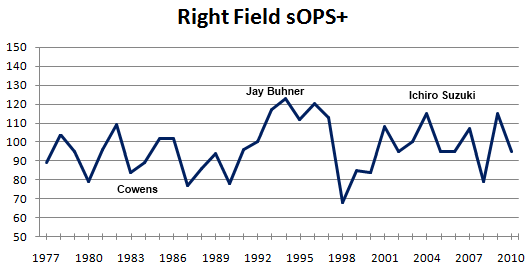 And where up to May of this season it seemed like we had another couple years of Ichiro at least, now that assumptions seems less sure. I hope this season is just a scare, and a reminder to appreciate Ichiro (and Felix!) before he leaves for good, but that he rebounds and goes back to being an net asset. It's hard for me to imagine baseball without Ichiro.