Mariner Center Fielders Throughout the Years

Share All sharing options for: Mariner Center Fielders Throughout the Years

Positions up the middle of the defensive field are the hardest to find quality bats and it's a bit funny that two of the best hitters the Mariners have ever hosted called those places home. Alex Rodriguez has already been seen in the shortstop edition and now at center field is probably the most identifiable Mariner ever in Ken Griffey Jr. His long reign in center field, so far above what one normally expects from that position has made it the position with the highest split OPS+ for the team at 108 until this year's putrid performance knocked it down a couple points. 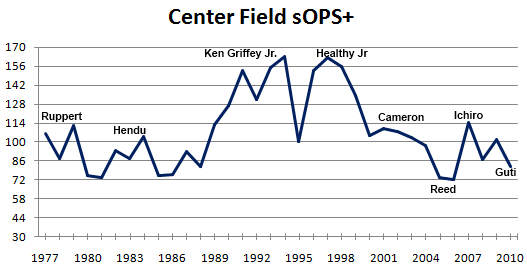 Memory is a fickle, biased, untrustworthy, downright terrible thing. I'm not going to state that what I remember is actually what happened, but I remember watching the game in 1995 when Griffey broke his wrist. It looked awful and to this day I don't understand why the Mariners show that highlight ever. It was a fantastic catch of course, but the consequences just about capsized the team during a time when the city could least afford it. I didn't immediately know his wrist was broken of course. I just feared it was bad.

I believe that I found out later when my dad interrupted me playing Ken Griffey Jr presents Major League Baseball to tell me the news. Further, I recall my reaction being "welp, so much for this season." Not in those words of course, I didn't have "welp" in my vocabulary at age nine, but a feeling of resignation I do remember. It was understandable and it sucked coming on the heels of the devastating 1994 strike.

It's odd, given how many great moments that Griffey had in Seattle, that when I start listing off memories of him, two of the first to come to my mind are terrible ones; the aforementioned injury, and when I saw his TV interview stating that he wanted to be traded and only to Cincinnati. The dreadful 2010 season at least lacked a defining memory to me, given how silly the whole napping controversy was to me. It's a shame that those are events that stick the most. There were so many good ones that he provided and they far outnumbered the poor ones.