Mariner Left Fielders Throughout the Years

Share All sharing options for: Mariner Left Fielders Throughout the Years

Another day and another position to chronicle. Except not, really. Here's why. 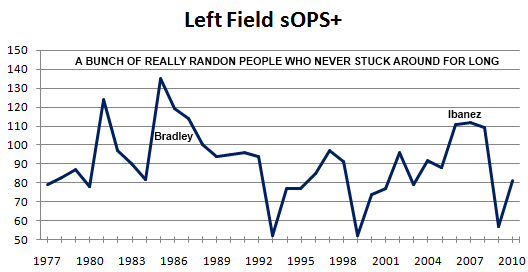 What's there to chronicle? Phil Bradley held down the position for like 12 games and a few years ago Raul Ibanez spent four of five seasons in left field, but he didn't exactly play left field. He was more stationed in left field. The way troops are stationed along the de-militarized zone but don't actually do anything. They're just there to make faces at the other side and raise alarm should an attack come across. Which is silly, because the entire thing is one giant land mine. They're not coming across, you guys. Why not do something more productive? That's what Ibanez was doing and he played left field in a manner that also evoked the image of someone trying to avoid stepping on land mines.

Other than him, nobody has lasted in left field for longer than a soap opera marriage maintains fidelity. Coming in, it boasted a 90.4 average sOPS+. This season, true to form, ten different players have taken a turn in left field for the Mariners and they've combined to be bad with Carlos Peguero and Milton Bradley the biggest piles of opportunity and misfortune.

Will the team find a consistent starter there? They have another half dozen prospects to try so my bet would be on the "no" side of the ledger, but they don't offer that bet. Savvy, Vegas. Savvy.