Mariner Shortstops Throughout the Years

Share All sharing options for: Mariner Shortstops Throughout the Years

Shortstops have had the third highest positional sOPS+ for the Mariners and it's no secret why. Getting monster seasons from Alex Rodriguez helped offset some of the worst hitters ever. Still, it's been a below average position for hitting and Brendan Ryan isn't going to help that, though his glove helps mitigate the pain. 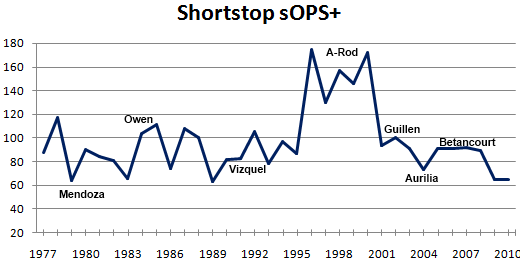 Alex Rodriguez was without a doubt one of the best players the Mariners have ever had in uniform and he was here for quite a while, over five full seasons. It doesn't sound like much, it's less time than Felix Hernandez already has as a Mariner for instance, but it's more than Adrian Beltre had and it was long enough to provide a lasting footprint on the history of the team.

What makes a player a legacy favorite for a fan base? In recent history, I'd say there are four incredible hitting talents that have stopped in Seattle for a considerable time, with varying impressions: Ken Griffey Jr., Alex Rodriguez, Edgar Martinez and Ichiro Suzuki. If you had favorable/unfavorable poll ratings for those six amongst Mariner fans my estimate for their breakdown would be along these lines:

Those are off the cuff guesses to be sure and I honestly am not that clued in any longer to how the general fan base feels. Feel free to debate the above in the comments; it might make an interesting conversation. However, I think the ordinal ranking is probably correct and it got me thinking about the aspects that lead to a more favorable view. Memorable plays, especially in the postseason, are a big driver I'd think. Edgar was a grinding type player, and mostly didn't play the field, but The Double provides the nail to hang your memories of him on. Griffey has his catches in center and his home run swing. Ichiro and Alex lack those.

There's also perceived (as opposed to real) loyalty of which, again I think, only Edgar fully qualifies and weirdly, Griffey gets points for. Edgar is obvious as he stayed a Mariner. Ichiro, in the same boat and in a lot of ways very similar to Edgar, suffers from star player on losing teams syndrome and bias against his salary and (all opinion) race. I believe many people actually do have a notion of "Ichiro is selfish" in their minds and so team loyalty isn't going to register with them with Ichiro, especially considering many of those might see, rightly or wrongly, the Japanese ownership of the team as the only reason Ichiro is here. I'm not sure why Griffey gets a pass since he basically sold the team down the river on his way out, but his return (which he waffled on for months! Why isn't that brought up?) healed a lot of those wounds I bet.

In Alex's case, people clearly view him as a sellout, even though by many reports the team's front office expressed little desire to sign him after 2000. His actions throughout his post-Seattle career haven't exactly proved that a mischaracterization though. But I wonder how much quality of play factors into all of the above. All four were (or are) Hall of Fame talents, but Alex is probably the best. In the five full seasons, Alex Rodriguez led American League hitters in WAR and other high-minded metrics twice (1998, 2000) and was second only to a teammate (Griffey) once (1996). Alex Rodriguez never won an MVP award while a Mariner but a solid argument could be made that he should have won a whopping three. Would doing so have cemented a more positive impression of him in the Seattle fan base?