Mariner Third Basemen Throughout the Years

Share All sharing options for: Mariner Third Basemen Throughout the Years

Time for the third basemen! The second worst hitting position in Mariners history coming into the 2011 season, it was roughly half a point ahead of catcher, but thanks to the monstrosity that has been third base hitting this year, might end up below catcher once all the numbers are finished. I haven't had time to redo the total with the season officially over, but I checked last week and third base had just nudged under catcher, 86.0 to 86.1. Congrats, you guys! 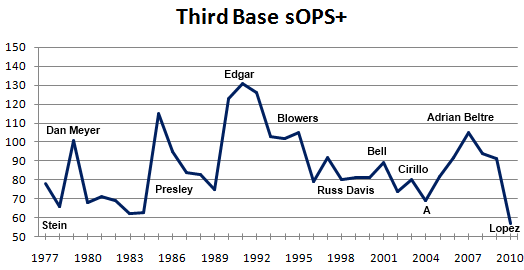 No surprise, but the third base position has undergone a lot of changes over the years. Not in the left-field-changes-twice-a-year way, but the Mariners just couldn't find or develop a talent to stick at third base over a prolonged stretch of time. It began with Bill Stein who was usurped by Dan Meyer. who moved off of first base, where he was terrible in 1978 (remember?) to third base in 1979 and was surprisingly good and then moved to primarily left field in 1980 and was decent.

However, there was no stability until Jim Presley arrived in 1984 and basically had 1.5 goods season, from 1985 through the first half of 1986. Aside from that stretch, Presley was downright awful while Edgar Martinez mashed in Calgary missing probably something like 750 Major League PAs he should have had until becoming a full time starter in 1990 finally. Edgar got a couple years at third and then the injuries happened and so came Mike Blowers and like 25 games of Dave Magaden until Russ Davis showed up courtesy of the Yankees.

We had Adrian Beltre of course, and still miss him. If not for his injuries during his five-year contract, he would have had a shot at surpassing Jim Presley for the most starts at the hot corner in team history, but instead fell 55 games short. That mark is still there if you want to come back, Adrian!