Mariner Second Basemen Throughout the Years

Share All sharing options for: Mariner Second Basemen Throughout the Years

And now you might be wondering, "is Matthew going to go through all of these?" Yes. Yes, I am. Or you might be wondering, "is Matthew made of blueberry pancake batter?" No. No I am not. Why were you wondering that? How could I type these words if I had pancake batter fingers? Do you realize how sticky maple syrup gets? "Where does the maple syrup come from," you ask? What do you think takes the place of blood in pancake people? Duh, dummy.

So it continues with second base. Remember to hit up the original post on catchers for a quick explanation of what sOPS+ is and where to find it if you do not know. 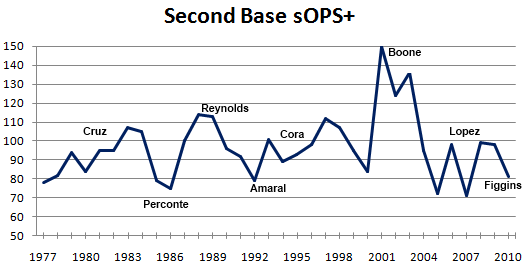 The team average sOPS+ for the position coming into 2011 is very close to the number for first base. While first base was a 96.9 average, second base is a hair below that at 96.8, a position I think will reverse at the conclusion of this season with the prowess of Dustin Ackley. While first base had a few notable players in the team history, second base basically rests entirely on the sheer insaneness of Bret Boone's monster seasons.

Perhaps some time in the future, there will be a similar spike with Ackley, but expecting that would be unfair to how ridiculously good Bret Boone was between 2001-3. In 2001, Boone posted a 153 OPS+. Just four players in the American League have a better mark than that this year and two of them are first baseman, one a DH and one a right fielder. Boone played second base and played it well.