There are those who bitch about Ichiro Suzuki and his salary and have been for ever and ever. That the team shouldn't pay as much as they do for a singles hitter, or whatever their language of choice. We know that's a lame and incomplete argument. Here is a chart I put together that I think shows how wrong it has been to criticize Ichiro's salary. 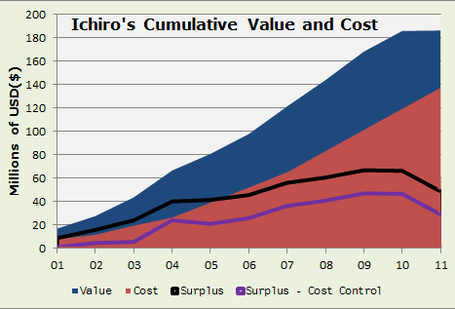 I think the chart contains everything you need to know, but here are the definitions for the data. Value is the average Baseball-Reference and FanGraphs WAR for Ichiro, multiplied by my best guess for the free market cost per win. Cost comes from Cot's Contracts and adding up all the base salaries, signing bonuses and award incentives stated. Surplus (the black line) is cost subtracted from value. Since Ichiro was not subject to the same sort of cost control rules that normal MLB players are, the purple line represents my best effort to illustrate Ichiro's surplus value adjusted for him not developing through the minor leagues and thus affording the Mariners the first three years of absolute team control. The Mariners paid Ichiro roughly $20 million in his first three years.

The black line increases every single year until 2010 when it flat lined (Ichiro produced almost exactly his salary last season) and then has dropped steeply this season. That means that Ichiro with his on field performance alone, more than earned his keep every year from 2001-9. He matched it in 2010 but has been a "toxic asset," to borrow a phrase, this season. Even after this terrible year, Ichiro's cumulative net return for the Mariners is nearly $50 million and again that's on field only. I cannot quantify how much he's brought the team in merchandising, higher TV/radio fees, higher franchise valuation, higher gate receipts and so on but I'm pretty sure it's more than $0.

Granted, Ichiro's contract now looks bad. The first three years worked out though. This fourth one has turned it into a bit of a negative and with his high salary next year, will be difficult to overcome. Ichiro needs about a 5-WAR season in 2012 to break even on his 2008-12 contract assuming the market doesn't go bonkers this winter. That's not impossible since, Ichiro, but seems unlikely. Nevertheless, I feel and I believe this chart demonstrates, just how much goodwill (if you use accounting as a basis) Ichiro should have stored up (from the fans at least) from his previous less-gaudy paydays.