Mariner First Basemen Throughout the Years

Share All sharing options for: Mariner First Basemen Throughout the Years

A month or so ago, I tracked the Mariners' catchers by season, grouping in everyone who played that position each year and charting their collective OPS+ against the league average for catchers. That number is otherwise known as sOPS+ (s stands for split. It doesn't stand for stand. That would be unhelpful if it did.) and is found on Baseball Reference under their splits section.

The Mariners have an awful history with catchers, barely ever getting above average (with the bat) and only ever having a sustained streak of decent with Dan Wilson. At first base, there's a been a little more to cheer for in the tangible realm of home runs, walks and base hits. While catcher has been the worst Mariner position for hitting, first base has averaged a 97 sOPS+ over the years. Nearly league average! 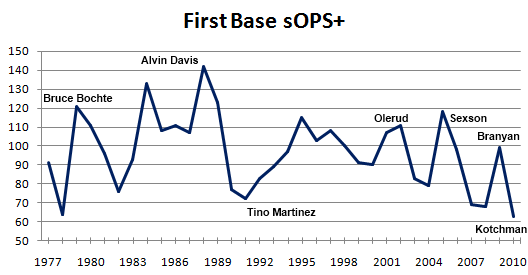 Dan Meyer was the team's first full timer at the position and on a very bad team didn't embarrass himself or anyone else. That lasted for that season as Meyer collapsed in 1978 and then the Mariners landed a legitimately over average bat with Bruce Bochte in 1979. He resided there only briefly and it would then be until Alvin Davis' rookie season in 1984 for the team to once again be a plus at the plate at first base.

Davis held the team above water until he fell completely apart in 1990. Thus begat the Pete O'Brien interlude, which I don't really remember with any concrete details, followed by the slow but steady growth of Tino Martinez culminating in the 1995 season after which he departed. Tino leaving crushed me as he had long been one of my favorite Mariners. I think I just liked the name Tino.

Paul Sorrento adequately held down the position for two seasons, but David Segui followed and then John Olerud until the team ditched him and his laughable "still drawing walks" approach. Richie Sexson came on the back of a massive free agent deal that I hated as soon as I heard it. It was during the run up to finals and I was in the top floor library of my dorm probably not studying for something. It was cold that day, I remember. It was cold like every day. I long for snow seasons in Seattle like the Midwest has, but I never miss the bone-chilling months of sub-freezing temps with 40+ mph gusts walking back to my crummy dorm room with its "heating." Cold better pay off with something. Snow is fine. Desolation also works, if the cold drives enough people away. Being in a major metropolis and slipping on three-week-old ice isn't a pay off. It just sucks.

Anyways, Sexson was an immediate success, but oh those pesky multi-year contracts. See that uninterrupted ski jump? Thanks, Bavasi. Then came the Jack Zduriencik era and the various play times of Russell Branyan, Casey Kotchman and now Justin Smoak. This season's performances from Justin Smoak and Mike Carp have been adequate in the grand scheme of things, though we hope for more from Smoak in the future based on the flashes he's shown, the prospect pedigree he held, and the cost to acquire him. Maybe in a few years time, that average sOPS+ will nudge over 100.