Some Tom Wilhelmsen Fun Facts That Are Fun

Share All sharing options for: Some Tom Wilhelmsen Fun Facts That Are Fun

Recently, Tom Wilhelmsen has become something of a pitcher of interest. This is because, where once Tom Wilhelmsen was bad, more recently he has been good. He's strung together four consecutive scoreless appearances, and while that isn't all that amazing of a feat, over those appearances he's had one walk and 12 strikeouts, which is more amazing, and especially amazing for him.

I thought I'd use this holiday Friday to take a closer look at Wilhelmsen, then, comparing early Wilhelmsen - pre-demotion Wilhelmsen - to later Wilhelmsen - post-recall Wilhelmsen. There are a few differences that I find particularly notable.

He has definitely been better
It's not an illusion. I don't know if anyone ever thought it was an illusion, but just in case, here's this.

He has been throwing harder
In case you didn't notice, Wilhelmsen's velocity is up. He already threw pretty hard in April and May, but lately he's kicked it up across the board. Observe:

We're looking at a boost of 1-2mph for every pitch. We usually expect pitchers to gain a little velocity as the season wears on and their arm strength builds, but Wilhelmsen seems to have made a greater than normal improvement. Here's his fastball velocity graph, from FanGraphs: 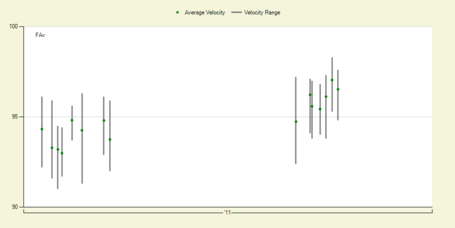 That's a pretty big swing, visually. I don't know what could account for this boost and I don't want to accuse Wilhelmsen of, say, poor winter preparation, but we can't argue with the facts, and the facts are encouraging.

He has all but eliminated his changeup
So maybe this one isn't good news like the first two. I don't know. But before going down to the minors, Wilhelmsen threw 12% changeups. Since coming back from the minors, he has thrown 3% changeups, or seven changeups out of 204 pitches. Right now he's almost exclusively fastball/curve, and while that isn't awesome news when it comes to projecting him as a starter, relievers don't need three pitches to succeed, and Wilhelmsen's change is his worst weapon. Cutting out the change clearly hasn't hurt him.

He has been locating lower
We already established that Wilhelmsen has been throwing more strikes, but in case you were wondering how, here are a couple pitch location charts, showing pre-demotion Wilhelmsen and post-recall Wilhelmsen (charts courtesy of Texas Leaguers): 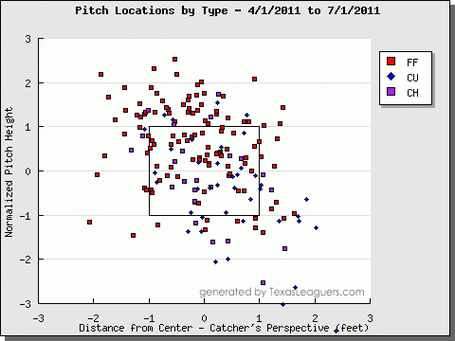 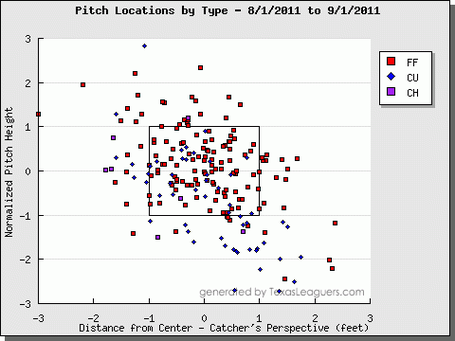 In case that doesn't make it clear, Wilhelmsen's average fastball lately has been lower by nearly five inches. His average curve has been lower lately by nearly three inches. He's not missing up nearly as often, and he's been staying in and around the zone.

Mechanically, I can't identify a difference between early Wilhelmsen and recent Wilhelmsen, but there's clearly a difference there, if only with regards to repeatability. Tom Wilhelmsen has seemingly improved, and though there's no guarantee this keeps up, the signs are good, and in Tom Wilhelmsen, the Mariners may have a legitimate Major League power reliever. They might also send him back down to try starting once more, but if they keep him in the bullpen, he might never see the minors again.