Nothing Recap For A Nothing Game

Share All sharing options for: Nothing Recap For A Nothing Game

That isn't really fair. Anthony Vasquez and the Mariners went up against Colby Lewis and the Rangers, and the Mariners only lost by a run. This wasn't a nothing game, in that a lot of things happened, and the M's did better than one would've thought. Yet the M's still lost, there weren't any major highlights, the game was essentially of zero significance, and besides, I didn't get to watch a minute of it since I spent a good chunk of the day writing about Mariano Rivera (other site, don't ask). So in lieu of a normal long recap, here's a scattered assortment of whatever little things come to my mind:

(3)
Somehow, Mike Carp turned this fastball into a home run: 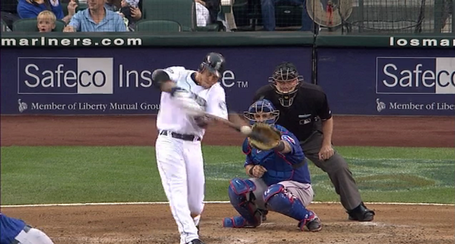 A pretty good home run, too, as it got out by a few rows to right-center. Sometimes, guys who mash in triple-A get by mashing with long swings that can be exposed in the Majors. Carp clearly has his holes, as evidenced by his low contact rate, but I don't think we need to worry about his swing being too long. That is a very tough pitch to hit out, and he hit it out.

(4)
Pictures Out Of Context: 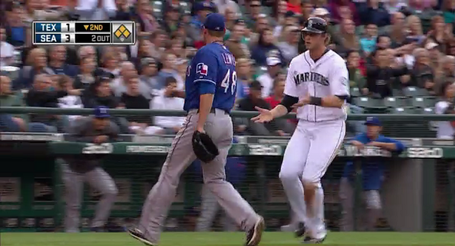 Saunders: Look at this butt!
Saunders: What is up with this butt?

(5)
Speaking of Saunders, he was a late replacement for Casper Wells and finished 0-for-2 with a walk and a strikeout. He is now 0-for-11 since coming back up, with two walks and four strikeouts. Small samples are small samples and nothing Saunders can do in September will determine his future, but God damn would it be super if he got a hit before the end of the season. Michael Saunders really bums me out, and that bums me out.

(6)
Congratulations to the 2011 Seattle Mariners for not only breaking the franchise record for strikeouts in a season, but for putting themselves on pace to obliterate it. With 1,187 strikeouts through 151 games, they're on pace for 1,273, which would beat the old record by 89. I'm kind of hoping they beat it by 100. Round numbers and all that. Plus, you gotta set the bar high for future generations.