It's an interesting parallel between the length of this game and the length of the regular season. This game between the Mariners and the Rangers lasted 162 minutes. The regular season, obviously, lasts 162 games. You could say that this game and the season are made up of the same number of individual components, and as is their custom in the latter, today the Mariners lost a whole mess of them in the former. I guess the parallel falls apart when you realize the Mariners can't actually lose minutes any more than they can lose innings, but you get the idea. Today the Mariners played 162 minutes against the Rangers, and they might've won 40 or 50 of them.

It's weird writing recaps when the outcomes don't really matter anymore. You never stop thinking about the outcomes entirely, and you pretty much always prefer a win to a loss, but as the losing gets deeper, and the season gets older, the priorities change. Early on, all you care about is winning. It makes little difference how. And if the winning doesn't work out, then over time you try to focus on other issues of interest. And that can make these recaps more difficult to begin, and more difficult to structure.

Right now, for example, I'm at a total loss for what to say. I've written two paragraphs and more than 200 words, but I think they're basically empty, and I'm just leaving them on the page because deleting them would leave me staring at blank space, and that would probably discourage me to the point where I don't end up writing anything at all. The Mariners lost to the Rangers 9-2, and you'd think that would be the story, but that isn't the story, because, who cares? But then, what is the story? Or, what are the stories? If not the outcome, what parts of today's game would people actually care about?

You'd assume that I'd be well trained for writing about a go-nowhere baseball team, and that assumption's probably correct, but it isn't always easy. I'm not always in the right mood to write, and I don't have the available fallback of just discussing the result. I mean, I guess I do, but I won't do it, because nobody cares. My job is to put out there what people find interesting, and sometimes, especially with games like these, I just don't know what people might find interesting. This was a very, perhaps exceptionally empty game.

(1) Jack Wilson went 2-for-4 with two doubles, including one that tied the game
(2) Charlie Furbush loaded the bases with none out in the fourth and only allowed two runs
(3) Franklin Gutierrez went 2-for-3
(4) Mike Carp hit a double

As far as #1 is concerned, that's great for Wilson, but I can't imagine that people care too much, given that as recently as a week ago it was easy to forget that Jack Wilson was still on this team. A couple doubles aren't suddenly going to convince another front office to throw the Mariners a prospect in exchange.

As far as #2 is concerned, hey, great, survival. In all, Furbush went 4+ innings, walking four while striking out zero. Charlie Furbush's game highlight was that he got himself into trouble and then only allowed a couple of those runners to score.

As far as #3 is concerned, it's good to see Guti picking up some hits, it really is, but as much as I want to believe that his bat is coming around, the lingering image I have from tonight is of Guti squaring up a Mark Lowe fastball in the top of the eighth and flying out to left in front of the track. I can't bring myself to take heart in singles and occasional doubles when the home run power is completely gone.

And as far as #4 is concerned, that double came in garbage time against a side-arming righty. Carp kept his modest hit streak alive, but he didn't wow anyone's pants off by doing so. You are now imagining what it would be like for Mike Carp to wow someone's pants off.

Tonight, the Mariners generated precious few highlights, and the highlights they did have just weren't anything special. I could choose to focus on the lowlights instead, then, but where's the fun in that? Where's the fun in saying that Dustin Ackley went 0-for-4, or that Trayvon Robinson went 0-for-3, or that Tom Wilhelmsen can't really throw strikes? I don't want to bum you guys out. I'm not shy about pointing out weaknesses and disappointments but I don't want to pack a recap chock full of them. I'm not in the mood.

Nine hundred words, and I don't know what any of them say. I suppose that means I'm done for the night. Thank you, Mariners, for forcing me to write the recap version of the game you just played. Because you played like crap, I get to lie in bed wondering what in the hell I just wrote on the internet.

In closing, here's a guy trying to distract Mike Carp with one really loud and well-timed clap of the hands. 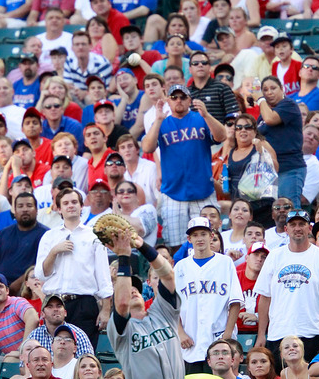