Share All sharing options for: Seattle Mariners Weekend In Review

Trayvon Robinson debuted
Robinson played all three games of his first-ever Major League series, going 2-for-9 with a single in his second at bat. He did a good job of showing what he's all about in a limited period of time, as he struck out four times, blasted a homer to center field, and robbed a homer in left. The contact, we knew would be an issue. The other things are cool, though. A lefty-batting Robinson took Tyler Chatwood (I know) 414 feet to the left side of center field, which immediately puts to rest any concerns that he doesn't actually have good power. And the robbed home run was just a really sweet and really athletic play to make, made all the better because it happened against Torii Hunter. Of all the players in baseball I like to see have home runs taken away, Hunter's near the top of the list.

It's also worth noting that Robinson initially stopped at second base when he hit his homer, thinking he'd hit a double. I have no idea what he was looking at. 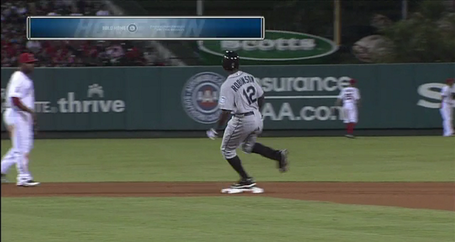 Felix was awesome
The Mariners lost on Sunday, but whatever, because Felix was amazing. He needed just 98 pitches to get through eight innings, allowing two runs on zero walks and 12 strikeouts. His 20 swinging strikes were the most he's generated since August 10th of last season, and it was gravy for him to do this against the Angels, since they've hit Felix as well as anybody over the course of his career. Which isn't to suggest that the Angels have some sort of Felix antidote, but we've seen Felix struggle against the Angels in the past, so it was a nice change of pace for him to dominate them today. Even in a losing effort. Felix got tagged with the loss, but he was one of the last players responsible.

Blake Beavan was good too
Beavan wasn't good in the way that Felix was good (ed. note: because Felix was better than good), but he did allow a run in eight innings on Saturday, with zero walks and two strikeouts. Beavan is obviously not a strikeout guy. He will never be a strikeout guy. He doesn't have the stuff to get more than a small handful of strikeouts a game. But as we've said before, it's amazing how much a pitcher can accomplish if he simply throws strikes. Beavan threw 68% strikes with Tacoma. He's thrown 67% strikes with Seattle. As long as he can keep doing that, he can fit at the back of a rotation. Yes, he'd still have his bad days, but a starter who doesn't have bad days isn't a back-of-the-rotation starter. A starter who doesn't have bad days isn't anything, really, because such a starter doesn't exist.

Mike Carp stayed hot
Carp singled on Friday, doubled on Saturday, and singled twice and homered on Sunday. His season OPS is up to .847, and even though that's inflated by some batted ball unsustainability, he's running an isolated slugging percentage over .160, and of .220 since he was recalled the second time. Today he absolutely maimed a low-inside Ervin Santana changeup out to right-center field, landing where indicated: 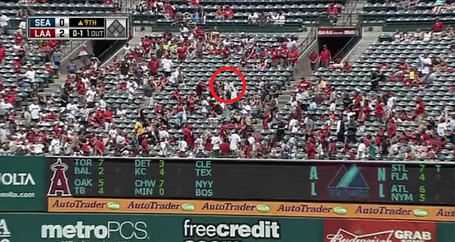 Right now, Carp is seizing his opportunity, trying to show that he's a legitimate part of the future. He's somewhat unexciting as a regular DH, since he's not David Ortiz or anything, but anyone who's familiar with the Mariners' recent track record of designated hitters can't afford to be too picky. If Carp's even a league-average bat, I love him in next year's lineup.

Dustin Ackley played sweet defense
This was a pretty quiet offensive series for Ackley, although he did manage to reach base three times. While Ackley didn't put on a show at the plate, though, he did impress in the field, and Mariners.com offers highlights of this play and this play. I am seriously curious just what those scouts who were down on Ackley's defense in the minors were seeing. Were they all wrong? Has Ackley just improved really quickly? Is Ackley playing over his head right now? I have yet to see a weakness in his game. He doesn't play second base like Brendan Ryan plays shortstop, but he plays second base like a second baseman, and that's all he needs to be able to do.

The Mariners released a new Larry Bernandez commercial
I wasn't wild about this idea, since the first commercial was terrific and good things should be left untainted, but all things considered, this isn't bad, and it could've been much much worse. Glad to see them sticking with the weird theme. It's important to embrace the weird.

The Mariners lost two of three games
Did I mention that? I guess I should mention that. Now it's been mentioned. The Mariners lost two of three to the Angels, but that's really the Rangers' problem, and the M's did outscore the Angels 6-4. Starting tomorrow, the Rangers get their turn for three days. It's not like they can complain about anything; while Seattle's only 4-8 against Los Angeles, they're 2-8 against Texas, and the teams meet nine more times. Fun fact: in head-to-head contests, the Rangers have outscored the Mariners 42-20.