An Assortment Of Thoughts On Dustin Ackley

Share All sharing options for: An Assortment Of Thoughts On Dustin Ackley

Because I'm thinking so much about Dustin Ackley, I'm coming up with an assortment of thoughts around the one central subject. You may find the assortment of thoughts below. Each could probably make for a standalone post of its own, but this way is much much easier for me, and you know me, gotta make everything easy.

(1) Dustin Ackley has an OPS+ of 165. An OPS+ of 165, through his first 159 trips to the plate. Were the season to end today, that would be the fifth-highest OPS+ for a rookie in baseball history, with a minimum of 150 plate appearances. It would rank below Willie McCovey and Frank Thomas, but ahead of Ted Williams and Albert Pujols.

McCovey and Thomas were also only up for a short while. Williams and Pujols played full seasons. I would anticipate that Ackley's numbers will come down between now and the end of the year, and I'm not trying to compare Ackley as a player to McCovey or Thomas or Williams or whoever. The third-best rookie OPS+ ever belongs to Bret Barberie. I'm just noting that Ackley's performance so far has been sensational. Rookies do not come up and do what Dustin Ackley has done.

(2) We've spent so much time in the past talking about Dustin Ackley's ceiling. Trying to figure out what kind of player he'll be in his prime. Will he be like Brian Roberts? Will he be more like Chase Utley? Will he be less than that? What's weird is that I think we're seeing prime Dustin Ackley right now. Prime Dustin Ackley might walk a little more, but Ackley's batting .315/.377/.559. Those numbers aren't a fluke, as he's earned them with his performance, but it's hard to imagine him doing much more than that.

(4) It's so interesting to observe how Ackley has come along. Below, please find Ackley's groundball rates:

When Ackley debuted in the minors, he was a fairly extreme groundball hitter. Gradually that's gone away, to the point where, so far in the Majors, he's been a fairly extreme fly ball hitter. That means fewer infield singles, but way more power, and as power is key to reaching the next level of production, this is a positive development. Ackley had 48 extra-base hits in 134 games a season ago. In 105 games this season, he has 49.

(5) Lots of people used to question Ackley's power. He's a smaller dude, and there was a substantial group that put his home run ceiling around 10-15. Ackley hasn't blossomed into a slugger, and he's never going to participate in a home run derby, but he has done this:

He hit one out to a similar spot in Oakland, too. In a month and a half, Ackley has twice cleared the fence in straightaway center, which isn't an easy thing to accomplish. Ackley has power. More than many have given him credit for. You can't fake a home run to straightaway center field in Safeco or whatever the Coliseum is being called these days.

(6) An interesting thing about Ackley is that he's a contact hitter who can hit for power. In both Tacoma and Seattle, he's posted contact rates of 89%, which is really really high. And in Tacoma and Seattle, he's posted a combined isolated SLG of .205. Most contact hitters are guys like Juan Pierre, Marco Scutaro, Brett Gardner and Jamey Carroll. Their offensive games revolve around slapping the ball into play. Ackley puts the ball in play, but he does so with a little more oomph. Here's another comparison to Pujols. Also Ian Kinsler, Victor Martinez, Robinson Cano and Dustin Pedroia. There aren't a lot of players who hit for contact and power, and the ones who do tend to be pretty good.

(7) Courtesy of Texas Leaguers, here are the pitches from lefties at which Ackley has swung: 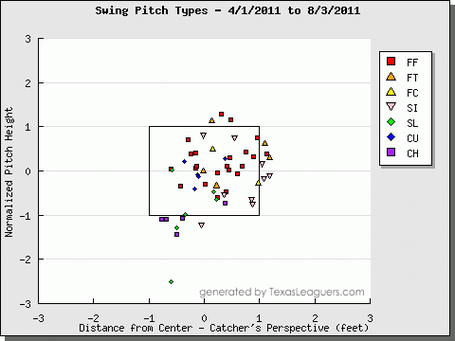 And here are the pitches from lefties which Ackley has taken: 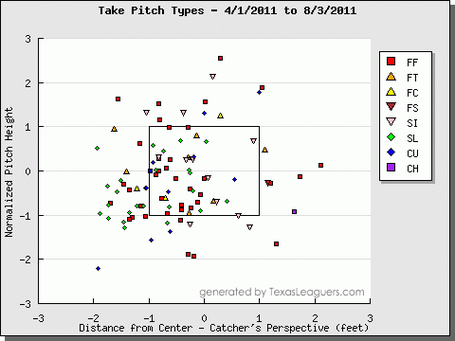 Pretty clear plan, there, and good execution. Ackley has watched the majority of pitches towards the other edge of the zone, and jumped on pitches down the middle or on the inner half. In other words, pitches he can drive up the middle or pull. One notes that Ackley is 11-for-37 against lefties with an .836 OPS. This speaks to his ability to recognize pitches right out of the pitcher's hand.

(8) When you examine Ackley's swing patterns, you can really get a good idea of his discipline. Below, all the pitches at which Ackley has swung: 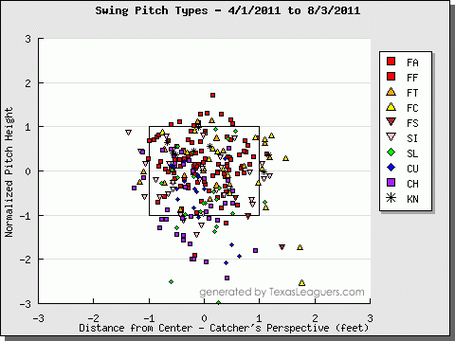 And all the pitches at which Carlos Peguero swung: 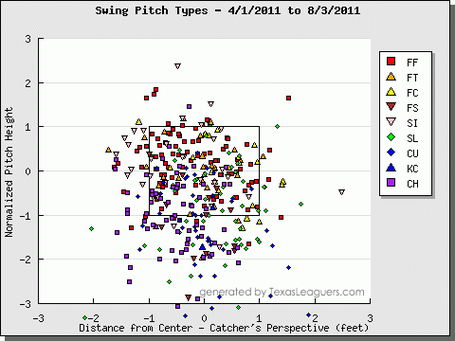 With Ackley, they're all so clumped. With Peguero, they're more scattered. Ackley is by no means perfect. There are a number of swings at pitches down, out of the zone. But he hasn't really chased much inside, outside, or high. He obviously knows the zone, and if umpires were more consistent about how they call pitches outside off the plate, Ackley's numbers would look even better than they already do.

(9) I don't think many people were counting on Dustin Ackley's triples. He already has five in limited time, and while he isn't Jose Reyes, he runs very well and he's a threat to keep going on any ball hit to the gap. By being able to turn some doubles into triples and some singles into doubles, Ackley's hustle ought to make sure his slugging percentage stays good. Unless he, y'know, goes all Yuni.