Jack Zduriencik is not without his flaws. He allows the manager to have too much control over the lineup. He does not appear to understand catcher defense. He seems to be reluctant to change a good process when it has led to bad results, even though the bad results may be indicative of future results...

But one thing that cannot be denied is what Zduriencik has been able to do with this farm system. With names like Jabari Blash and Chaz Roe, the Mariners currently have some of the best names in minor league baseball. Yet knowing your own minor league system isn't useful. You need to also be able to compare your names to those of the rest of baseball to see if you really come out on top. So where does the Mariner farm system rank?

With that, I have some great news for Mariner fans. According to my calculations, the Seattle Mariners currently own the number 1 farm system in all of baseball, and it's not even close.

The chart below illustrates the differences between the teams. The Mariners have a commanding lead, easily owning the top spot with 29 of the best names in all of the minors. Only the New York Mets are within shouting distance, with the Texas Rangers, Oakland Athletics, and Angels all at the bottom of the list. 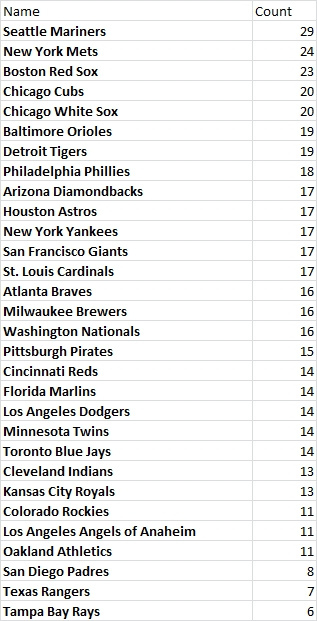 Much of the credit has to go to our international scouts, who have easily been able to nab some of the best names available from all over the world. But GMZ's ability to sign the top names of the draft has also been a huge factor.

And who do the Mariners have that allows them to hold the number one farm system in baseball? We all know about Jabari Blash, Forrest Snow and Jetsy Extrano, but it's names like Kalian Sams, Nick Czyz, and Bo Reeder that really put us ahead. With Keli'l Zablan, Edlando Seco and Ambioris Hidalgo, the Mariners have a name force to be reckoned with.

You can find the breakdown of all of the best names in the minor leagues here by clicking on this link. Each name is organized by team, allowing you to easily compare and contrast the Mariner farm system with the rest of baseball. Scroll right to see the complete Mariners list and see how other teams like the New York Yankees and Boston Red Sox stack up.

2011 hasn't been the greatest year for the Mariners, but with a minor league system that is stacked with great names, the future of Seattle is bright.