The Mariners lost to the Rays yesterday thanks to a complete bullpen meltdown (ed. note: that'll learn you for being nostalgic), but while the collapse was a little hard to take, the game itself, I think, will be remembered for two things:

Facing James Shields in the top of the eighth, Pena fell behind in the count 1-2, then stayed with a low-inside breaking ball that missed its spot. Pena doesn't always stay with breaking balls, but when he does, this is the kind of thing that can happen.

As posted in yesterday's recap, this was the scene immediately following contact: 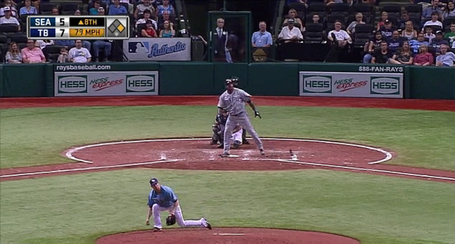 And this was where the ball wound up: 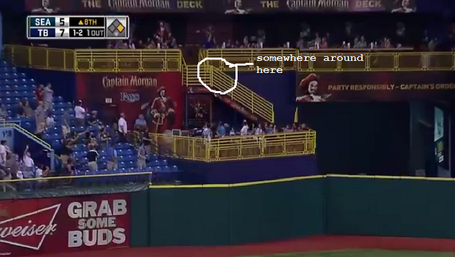 The ball hit near the top of that staircase on the fly, then bounced down into that beer garden, where it cooled for 35 minutes before it was safe for humans to handle.

It was, obviously, an impressive home run, clearly gone right off the bat. It wasn't majestic, but only because "majestic" is usually applied to home runs that tower above the field of play. This was more violent. Forceful. It was literally as if the ball were fired out of a cannon. If there had been a person on the staircase where the ball wound up, today he'd have a hole in his body the size of a soup can.

Pena's home run yesterday is tied for the longest in recent Mariners history with one hit by Raul Ibanez five years ago. And Pena's was a little faster off the bat. In April 2007, Adrian Beltre hit a homer at 117.4mph off the bat, and Pena just eclipsed that one, too. Based on the evidence, Wily Mo Pena's home run was - just barely - the best-hit home run by a Mariner during the Hit Tracker era.

So it doesn't mean much. Wily Mo doesn't get a trophy for his efforts, unless he prints this out and folds it funny and mounts it on a block of wood. But it's still pretty cool, and I can't think of a better player to sit at the top of the list. Carlos Peguero is strong. Russell Branyan is strong. Wladimir Balentien is strong. But Wily Mo Pena is Wily Mo Pena. He may only hit one home run in the uniform, but if that turns out to be the case, he sure as fuck made it count.