As Matthew noted in the post below this one, the player to be named later in the Doug Fister trade has become the player to be named about an hour ago, as the Mariners have officially selected Chance Ruffin from the Tigers. To make room on the 40- and 25-man rosters, Aaron Laffey has been designated for assignment, and Ruffin will report right to Seattle. He'll be in uniform and available tonight.

It's hard to work up much emotion over the Laffey move. For one thing, there's no guarantee that he's done with the organization, as he might clear waivers and report to Tacoma. And for another thing, he simply isn't that good. He wasn't good when the Mariners got him and he hasn't been good when the Mariners have used him, and it's not like his repertoire gives him potential upside out the wazoo. I'm thankful that Laffey kept his ERA low for as long as the M's were in contention, but that's it. Nothing personal, but I wouldn't mind if I never saw him in a Mariners jersey again.

The background for Ruffin is that he was selected 48th overall in the 2010 draft. He's the son of Bruce Ruffin, and he pitched for U Texas before getting grabbed by the Tigers. He's a 22-year-old righty reliever who began his professional career in double-A, where he closed. He's also closed in triple-A, and he's made two appearances in the Majors.

But you probably don't care so much about the statistics. You probably care more about what Ruffin actually throws. And what Ruffin actually throws is a fastball in the low- to mid-90s, and a slider that Baseball America ranked as the best in the Tigers' system last November. He also tools around on occasion with a changeup, and some people say he throws a curve, but his changeup isn't good, and if his curve exists, it isn't good, either. Like so many other righty relievers, Ruffin sits almost exclusively fastball/slider.

It's a power arsenal that allows him to dominate at times, when he has his stuff under control. Which he doesn't always. Ruffin doesn't have pinpoint command, and because he likes to work up in the zone, he can hang some sliders. But at the same time, no one would describe Ruffin as "wild," as he's more in control than he isn't. And, of course, he could get better. He's still new.

It's worth noting that his arm angle is pretty low: 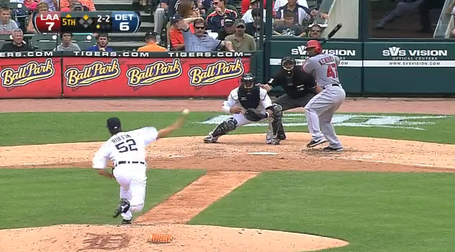 As always, that should make him more tricky for righties to hit, and less tricky for lefties to hit. With a low arm angle and a presently poor change, Ruffin could have some problems against lefties if his location isn't really good. But he should succeed against righties, effective immediately.

Ruffin's pretty good now, and he could, in time, be better than that. Here's to success.