On Jack Cust, Mike Carp, And A Whole Assortment Of Things

Share All sharing options for: On Jack Cust, Mike Carp, And A Whole Assortment Of Things

It's Friday, and Friday means I have even more trouble connecting my thoughts than I normally do. To make matters worse, it's Friday afternoon, when I feel less like an employed, motivated writer and more like a motivated test-napper in a clinical study. I can't remember the last time I accomplished something on a Friday afternoon I was proud of, unless you count not getting into an accident when I'm driving. I did doze off very temporarily one time while driving home from my old job on a Friday, but I didn't crash, so, no lesson learned!

Nevertheless, while most of my brain is trying to sleep right now, there's a tiny part of it that keeps spitting out little writing ideas, and the ideas are keeping the rest of my brain awake, like train horns, or birds outside the window. So the little part and the big part have reached a compromise: the big part will compose a blog post jamming all the ideas together, and then the little part will shut up long enough for the big part to go dreaming for a little while. The other day the big part was dreaming about moving to Hawaii. It really wants to get back to that.

So, an assortment of small things, tied together only by the common thread of having something to do with the Mariners:

After Jack Cust was designated for assignment by the Mariners, he dropped by the A's clubhouse to say hey, and he mentioned to a journalist or two that there was a handful of teams interested in picking him up. One would've figured that all those teams would've been American League teams, given that Jack Cust is a DH, and only a DH.

But earlier Friday, word got out that Cust has been signed to a minor league contract by the Phillies. The very much National League Phillies, who already have a traffic cone occupying one corner of the outfield. It's only a minor league deal, so there's no commitment, but I guess in Cust the Phillies see a guy who might be of some use as a pinch-hitter.

Which is interesting, given what we saw from Cust as a Mariner. Once upon a time, Jack Cust homered, walked, and struck out. He doesn't homer anymore, which means he only walks and strikes out, which makes him the least like an alert human baseball player that he's ever been. Or, looking at things another way: 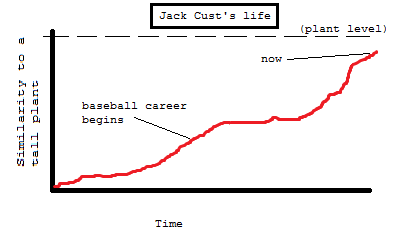 At this point in his career, Jack Cust is basically a tall plant. We'll see if he ends up being the first tall plant in baseball history to get fitted for a ring.*

* as if a plant doesn't have enough rings already!

When Mike Carp joined the Mariners' organization, he was coming off a double-A season that saw him bat .299/.403/.471. He drew a ton of walks, but his power was mostly limited to the gaps, and most people were pretty down on his ceiling. If things broke right, the word was, Carp could turn into a worse defensive version of Lyle Overbay, and a worse defensive Lyle Overbay just isn't much of a get.

Carp remained more or less the same kind of player the next year in Tacoma. But then he changed. Mike Carp's different now. The walks are down, and the power is way up. And speaking of things that are up:

It doesn't look like much, but it's significant. Carp is a more aggressive hitter now than he was, and he's a more powerful hitter now than he was. Are the two points related? Is this just a coincidence? I don't have enough information to say. But where Carp once looked like a patient gap-hitter, that's no longer his skillset. He swings more now, and he's more capable of knocking the ball over the fence.

Carlos Peguero was demoted back to Tacoma in the middle of July. Here's what he's done ever since, in about 100 trips to the plate:

Awesome, right? Yes, and no. Here's what else he's done:

And it's not like he's making progress in that regard; so far in August, he's got zero walks and 17 strikeouts. You like to see a guy beating the crap out of the ball, and Carlos Peguero has most certainly been beating the crap out of the ball, but he won't have a future until he learns a little discipline, and I'm guessing by the four walks and 35 strikeouts that his discipline still has a ways to go.

According to Mike Curto, Michael Saunders might re-join the Rainiers tonight after taking time off to be with his family following the passing of his mother. Saunders was already a guy most of us were rooting for more than almost anyone else, but now that he's had to go through a stretch of impossible hardship, I couldn't want more badly for him to succeed. It's stupid, and it feels stupid, to be talking about Saunders' baseball career when there are so many more important things, but baseball is a huge part of his life, and he deserves for his life to be easier than it's been.

Justin Smoak is back in the lineup tonight after missing several days with a thumb injury. This is probably worthy of a bigger, separate post, but just how much are we all counting on the notion that Smoak's other thumb injury is largely responsible for his collapse? It's convenient and it seems to make an awful lot of sense, but the team won't admit to anything, and what if they're right? What if Smoak's injury wasn't a big deal, and what if he's just lost his swing? What if Smoak isn't just an extended rest away from getting back on track?

Smoak started the year on fire. We've seen him have great success against great pitchers, and great pitches. We know what he's capable of. I've been assuming that he'll be able to get back to that when he's better. What if it isn't that easy? Mike Carp might be even more important than we already figured he was.

With Lueke, there will always be ugliness, and there are a lot of Mariners fans who wish he would continue sucking so the team would cut bait. There's nothing I can say to those people. It is their right to think what they think, and like who they like. To the other Mariners fans, though, I can say, hey, it looks like Josh Lueke's all right. At this rate he could and should be an important contributor in next season's bullpen.

Miguel Olivo is working on an active streak of 25 starts without drawing a walk. That's long, and it's bad, but it's not yet historically relevant. There have been 174 longer streaks since the 2000 season alone. In 2007, Royals shortstop Tony Pena drew a walk on May 5th, and then didn't draw another walk until July 26th. Between those dates, he started 64 games, batting .305/.305/.395. Wait a second, .305? Holy shit, that might've been the most successful stretch of Tony Pena's career.