Mariner Catchers Throughout the Years

Share All sharing options for: Mariner Catchers Throughout the Years

I mentioned sOPS+ here (gratuitous reminder of how much Brian L Hunter sucked alert!). To plagiarize from myself

Split OPS+ is the OPS grouped by position then compared to the MLB-wide OPS at that position. An sOPS+ for DHs last year would take every trip to the plate a Mariner DH took, add them up and then compare their on base and slugging percentages to the MLB average for DHs.

I'd prefer to use wOBA so that OBP is valued more correctly, but Baseball-Reference makes obtaining sOPS+ easy so that ended that hope. The Mariners have averaged an 86.6 sOPS+ out of their catchers for the past 34 seasons. That makes it the worst position on the team, narrowly edging out third base which averaged to an 87.2 number. The Mariners haven't been consistently terrible though. It has been more of a see-saw battle between average and atrocious which just sort of averages out to mediocrity. Check out the progression by season.

NB: Ignore the OPS+ in the title. It should read sOPS+. 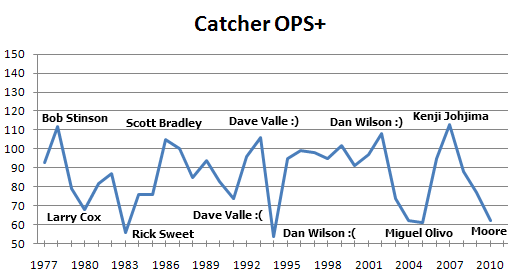 It is not surprising since it has been the worst hitting position in Mariner history, but the Mariners have experienced awfully high turnover at catcher. Only six men have managed to reach 1,000 plate appearances as a Mariners catcher. Kenji Johjima, whose presence here now seems like a fleeting memory lingering only because of a vague rememberance of what a successful hitting catcher looked like and a misused meme, has the third most trips to the plate ever for a Seattle backstop.

Dan Wilson has the longest, and most successful, tenure lasting from 1994 through 2004. Mariner catchers averaged an 89 sOPS+ over that span which is only slightly better than the 86 sOPS+ they averaged in the other years. All hail small improvements!

You'll notice Miguel Olivo at one of the many valleys on this time series. Based on the previous samples of Dave Valle and Dan Wilson, and with no ability whatsoever to realize that this is sarcastic use of really bad math, Miguel Olivo is due to be adequate this time around! Instead, he hasn't been. He's been better than the sinkhole he was, but a 72 OPS+ is not good and for the team, it's at a pathetic 68. Olivo has a sub-.500 OPS since July 1. He's also sucked at home (surprise! .535 OPS for the season) and, curiously, against lefties (.551 OPS) this season. Since the injury that took him out for about a week, Miguel Olivo has a .498 OPS. In 99 trips to the plate, he has five extra base hits. He also has 29 strikeouts and -- you know what's coming -- zero walks.