Share All sharing options for: More Park Factors and Defense

I cannot help it; I have a mental itch now with this defense stuff and I am constantly scratching it. Luckily, sometimes useful stuff falls out* and I get to make a post about it. Today's (or rather Tuesday's when I did most of the work), development takes its inspiration from two sources and potentially mitigates a problem of great consternation for me.

*What a gross image I just suggested to you

This problem has been lingering for a while now and I had pretty much shelved tackling it head on without access to data that I was never going to get. Instead, I circumnavigated around it by combining fly balls and line drives into one proverbial bucket, but I never felt that was a complete solution. Doing work on the park effects for the Kingdome got me thinking about the astroturf there and how that affects a defense and that's when I realized that I could simply calculate park factors for reaching base via batted balls (RBBIP).

Simply put, using the same formulas as I do for all other park factors, but this time looking squarely at the stat (RBBIP) that I was using to attempt a defensive measurement, I could apply those factors to correct the park and scoring bias and that problem linked above goes away. That leaves behind a team-level measurement for defense that I actually have a respectable confidence in.

Now, using that park factor algorithm introduces the same sort of consequence that I have with the factors for ground balls and such themselves in that it cannot tell the difference between a park effect and a scorer effect, but the beauty is that I do not care. Since I deal with rates and not with absolute totals, I want them both removed as best as I can. It is of no matter whether fly balls are easier to catch in Safeco Field because the MLB scorers there are more prone to call "fliners" line drives (a possible scorer effect) or because something with the marine air in Seattle holds them aloft (a possible park effect). The goal is always to best figure out how a performance would rate in a vacuum, some mythical sterile ballpark with exactly average hitters, pitchers and fielders. By correcting for the effects on RBBIP in each park, I think the defensive metric takes one sizable step closer to that Platonic ideal. 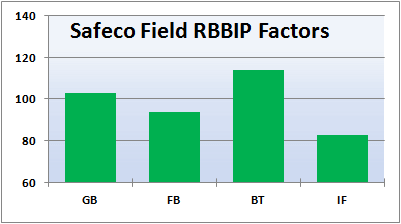 And if you were wondering, fly balls do appear to be easier to catch in Safeco. This has been theorized for a long while since various fielding metrics all seemed to fall in love with our outfielders repeatedly and while I'm not going to say this is now case closed, I do think this is solid evidence for the theory. In Safeco Field:

Take caution that smaller samples on the bunts and pop flies means a larger margin of error. Rates for Safeco Field come from a 650-game sample between 2003 and 2010. The good news is that these rates in other parks conform to what I would consider intuitive figures. Fenway and Coors see major increases in fly ball RBBIP for example while Comerica and Safeco are at the other end.

That stellar outfield defense all these years still rates well. This doesn't mean Ichiro's actually been a poor fielder or anything. However, they have gotten a little bit of help from something to do with either Safeco Field or the people that subjectively label the batted ball types. These adjustments will be reflected in the RBBIP defensive ratings from now on and I will explore some of the past numbers in subsequent posts.