This is Getting Ridiculous

Share All sharing options for: This is Getting Ridiculous

It was one thing to miss the game on Saturday while I was out amongst the Cascades and come back to find out that the Mariners lost in part because everyone in charge of counting to four stopped at three. After finishing up laughing hysterically and then laughing again after I realized it was a Doug Fister start, I moved on. Of course it was an inexcusable mistake by those involved and no, just because there were a couple foul balls does not mean you get to defer to an unofficial scoreboard operator. I could envision how it happened though. I can empathize even while I do not sympathize.

However, last night took it one step too far. This is out of hand. 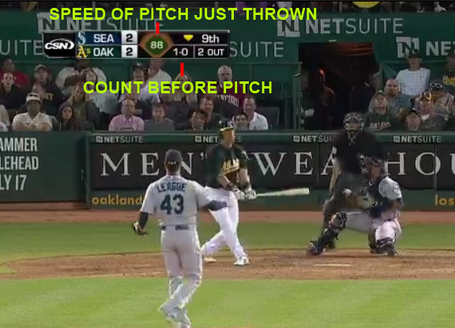 What kind of joke is this? 88mph is clearly not Brandon League's fastball and pitch F/X confirms. Since that's not a fastball, then obviously the count cannot have been 1-0. You want me to believe that Brandon League threw an off-speed pitch while behind in the count? The same Brandon League who has never done that all season? Get real. Yes, there was a caught stealing on the first pitch of the at bat, but come on! You have to remember the count after one pitch. One pitch! Forget robot umpires, MLB needs to hire some grade school children who at least can just track balls and strikes on their fingers.