Share All sharing options for: Why Jeff Gray Never Pitches

The Mariners have run with a six man bullpen for quite a while now and in practice it's been more akin to a 4.5-man bullpen which is is bad news for Chris Ray. How has this happened in an age where carrying eight relievers is not out of the question for some managers?

If I were to have hypothesized before this season what kind of team could pull this off, that team would want a strong showing in at least a couple of the following traits. They would have good starting pitching that soaked up most of the innings. They would play short games not only in run scoring but also in innings to avoid needing more relievers in extras. The relievers themselves would also have to be good so as to avoid mid-inning meltdowns and thus pitching changes. The 2011 Mariners are that team in spades. The first half of this season has been the perfect storm for them to survive with limited relief needs.*

*And good thing too with Shawn Kelley and David Aardsma both injured. Hey, Major League teams, does your bullpen suck? Why not follow the Mariners' lead and just not need one? This is also the slowly working theory on how the Mariners will solve the post-Edgar Martinez DH situation.

All numbers coming into play today. Given the above, here is an unremarkable chart: 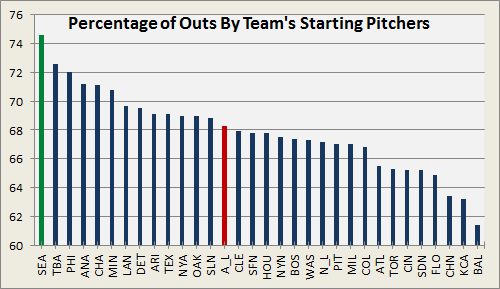 I wrote unremarkable because given the two facts, it's obvious the Mariners would be atop this list, but the gap between the Mariners and everyone else is remarkable. Here, watch how I will now commence with the remarks.

The Mariners are far and away the league's leader here at almost 75%. The rest of the American League is down near 68%. Seven percent might not seem like much, but given how far we are into the season, Mariner relievers would have to record the next 216 outs -- eight full games' worth -- in order to bring Seattle down to just the average AL club. It would take about 20 games' worth to fall to Baltimore's level, an amount that would carry the Mariners almost through the month of July.

Mariner games are also quick not just in terms of low run scoring (on both sides), but also in sheer length as well. The average Mariner game requires Seattle to record just under 27 outs, placing them 19th in baseball. The team's  below .500 road record (so the opposing team doesn't have to bat in the 9th) and a small number of extra innings contribute here. Also, the relief outing themselves have been solidly handled.

One way to see the impact of both of these is to look at how many total times a relief pitcher has been replaced. 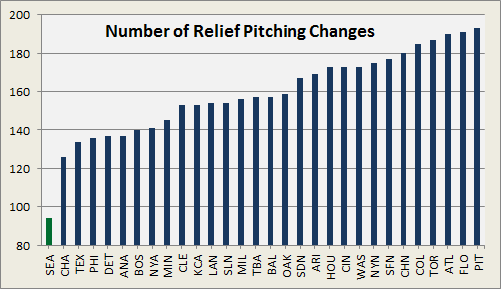 Granted, all these different causes looks are inter-related. The Mariners make fewer relief pitching changes in part because they have fewer relief outings to start with. But they all go to illustrate how the Mariners have not needed a deep bullpen this season. Which should not be confused with a proclamation that the Mariners should dismiss Jeff Gray and actually carry only 10 pitchers on the active roster. That's an entirely different matter requiring investigation into roster construction, future performance and various other aspects. The scope here is limited to just the how and the how is some pretty crazy performances from the Mariners top nine pitchers.