Lost somewhat in the epic losing streak is that the Mariners are at least losing to very good teams and mostly on the road. Texas and Boston are the two best teams according to my measures above. Anaheim is in the top 10 as well. Only Toronto is a merely average team. And now the Mariners travel to New York and play the Yankees. Or in pictorial form: 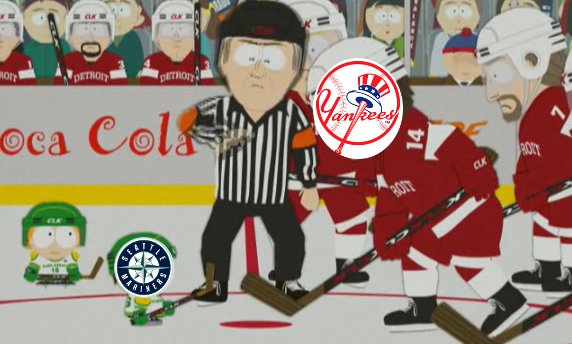 Freddy Garcia has become a junkballer. The fastball is hovering in the mid to high-80s and he only throws it a quarter of the time, roughly as often as he'll throw both his slider and his changeup. In other words, he's become a right-handed Jason Vargas. And the cycle continues.

It's a good thing that the Mariners have such a potent group of right-handed hitters so that they can nullify CC Sabathia...

Doug Fister against the Yankees in New York feels like such a disaster waiting to happen, but realistically that's not fair to Doug Fister. It's not like he doesn't face good hitters in other games. The AL East isn't an entirely different level of play from the rest of MLB. Fister has faced some of the best hitters in baseball and succeeded. Still, the feeling persists.

Felix Hernandez in Yankee Stadium. That's an amped up environment for Felix no matter the situation, but if he's bearing the weight of a 17-game losing streak by this time, I wonder what attitude he will have. I know he values himself as a team leader and is a prideful guy (as he's deserved) about his abilities. At some point though, does the losing sap even Felix's internal strength? I guess it didn't (seem to) last year.