Yay, they're not the Astros!

With rare exception, every baseball game is a game you want to see your team win. We watch for a variety of reasons, but one of the big ones is to see your team succeed, because a successful team is more fun than a less successful team. There are times when you might go in rooting for a loss, but those are pretty much limited to the final few weeks when you're hoping for a high draft pick, and they are few and far between.

So, yeah, I wanted the Mariners to win today when I turned on the TV, just as I wanted them to win all the earlier games. The same, I imagine, goes for all of you. It's way too early to start rooting for losses. This is still a season that can somehow be salvaged, and you salvage by winning.

When the M's came out swinging the bats, it was exciting. It wasn't exciting-exciting, but it was different-exciting, and happy-exciting. It was about as exciting as any non-historical sequence of events can be for a team that's out of the race. I wanted them to win, and at that point, it looked like they were going to.

Then the M's stopped swinging the bats, and the Jays came back. Then the game started to drag. Then the game went to extras. It was around then that I became aware of a shift in my desires.

The longer the game went, the less I cared about who won. To put it as best I can:

Everybody has their limit, and by the 13th, I no longer had a rooting interest. Or, I did have a rooting interest, but it wasn't in either of the teams. I was rooting for Run, and I was rooting against Not Run. It would have been one thing if the Mariners were playing for something, but they really weren't, and four hours was enough. Four hours was enough Mariners baseball.

Of course, this all would've shifted back up had the game continued. If I may make an attempt at a plot: 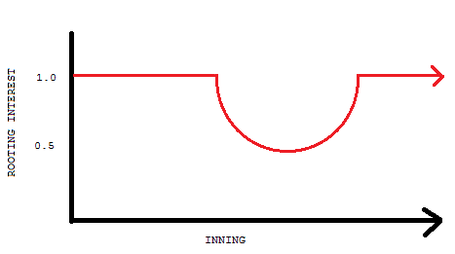 As extra innings begin to mount, I care less and less about who wins, to the point at which I'm pulling for each team equally. But then, were extra innings to continue to mound, I think that would reverse. As the game transitions from "dreadfully long" to "epically long," I think I'd find myself firmly back in the Mariners' camp, since at that point everything's absurd and I won't want to reflect on six wasted hours. Who among us doesn't look back fondly on Mike Cameron's walk-off homer in the 19th?

But the game didn't continue, because in the bottom of the 14th - right around my rooting interest trough - the Jays finally pushed across the winner. It was momentarily disappointing, just because I felt bad for the various Mariners who tried so hard for this to not happen, but the disappointment was countered by the thrill of being able to turn off the TV for the first time since 4. I love you, Mariners, but I don't always want to watch you, and sometimes that means I won't really care when you lose. What's another loss?

It's funny that the Mariners scored five runs and still managed to string together twelve consecutive scoreless innings. The team's best offensive effort in weeks was also one of its worst. I guess that's how you make the least of a good situation.

Going to throw together some shorter-than-usual bullet holes since I've already spent enough time thinking about this game:

Tomorrow it's Jason Vargas and Brandon Morrow, as the M's face Morrow for the first time since dealing him away. I am legitimately excited to see how this goes, and not just because I have the no-hitter post already written up.