The non-waiver trade deadline is now under two weeks away, and even though Erik Bedard remains on the DL, Brandon League seems an unlikely move, and most of the available parts could be approximated by pieces of driftwood with faces drawn on them, that doesn't mean we don't have any news to discuss. Let's discuss!*

"Felix is part of this organization. We’ve signed him long term. It’s great to look at our rotation and see Felix Hernandez, Michael Pineda and the rest of the guys we have," Mariners general manager Jack Zduriencik said Tuesday morning. 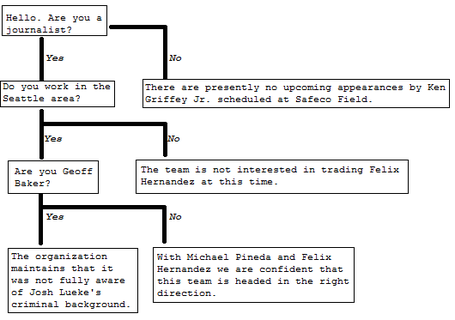 Still, I guess if there's an upside to national writers refusing to let this go, it's that every time they get a denial of interest, we get to sit where we're sitting and think, "yeah, Felix is ours, and you can't have him." That's nice. Sorry, Yankees, but the Mariners aren't interested in Jesus Montero's underachieving bat, or Phil Hughes' mysterious shoulder. You are free to keep using Bartolo Colon and Freddy Garcia, though.

...the Reds have expanded their search for a new leadoff hitter, as well.

The two names that currently interest them, according to sources: Seattle's Chone Figgins and Oakland's Coco Crisp.

Reds: We sure could use a hitter.
Reds: We should talk to the A's, or the Mariners!

I don't really understand this rumor, myself. I have no idea where Figgins would play. I have no idea why the Reds would want Figgins to play. Figgins is very very bad. But if the Reds' front office is run by internet message board commenters who think Figgins' only problem is that he doesn't lead off anymore, then by golly, the Mariners should try to make friends with them, fast.

Ultimately, this isn't that exciting of a rumor. Even if the Reds are interested in Figgins, and even if the Reds and M's were to work out a deal, the M's would presumably eat almost all of Figgins' contract. That, or they'd have to take something back, like Bronson Arroyo. The M's aren't going to come out of any Chone Figgins trade having won, and won big. But there is a certain appeal to just not having Chone Figgins anymore, so we'll see. People who don't watch Chone Figgins every day may have more confidence in him to turn things around than people who do, and so finding a trade partner might not be impossible.