Share All sharing options for: The Mariners' Defensive Conundrum

The biggest drains on the Mariners' UZR rating currently are Milton Bradley, Ryan Langerhans and Ichiro Suzuki. Langerhans was mostly because of his atrocious work in center field which looked as bad to the eye as it did in the stat sheets. Bradley was similarly plagued in left field and for whatever reason, UZR is well down on Ichiro in right field. For the first month of the season, we had by far baseball's worst outfield defense, which is not a claim I think many would have thought possible before the year.

Now I'm not enamored with UZR, or any defensive metric for that matter. I think they can give us the broad strokes especially when combined with our other comprehensive defense stats, but perhaps even the plus-or-minus five run margin of error we've typically employed has been too exact. Ultimately, the goal is to turn batted balls into outs and so I decided to take a look at how the team is faring on that measurement. After all, it struck me as curious that our run prevention has been so superb if paired with a defense so horrid.

Indeed, the Mariner pitchers currently have the eighth-lowest BABIP at .282. This despite nothing in the batted ball profile suggesting the defenders should be performing over their heads. In fact, it's the opposite as Mariner pitchers have surrendered one of the league's highest line drive rates and one of the league's lowest infield fly rates. Additionally, it's getting better over time. 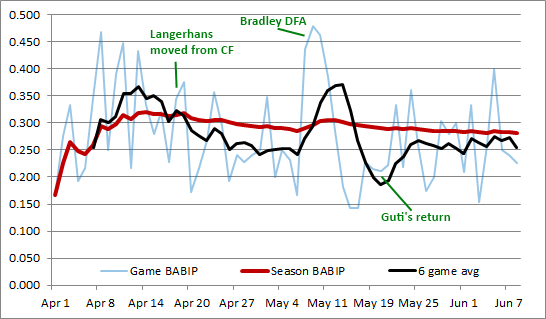 Granted, BABIP numbers in the raw are potentially misleading because there are park factors at play. Oakland with its large amount of foul territory should yield lower BABIPs than Colorado with its large tracts of fair territory. Correcting for that is difficult but would probably involve something along the lines of taking a combination of the single, double and triple handed park factors that I have on StatCorner. Instead of doing all that work for this minor point however, I instead just leave you with the warning to not ignore parks. I wipe my hands of your future misinterpretations!

What I am left with is that the balls in play facing this team's defense would seem to predict them turning a below average amount into outs. Instead, they have one of baseball's best rates at capturing them for outs. It doesn't appear related to Safeco Field in any meaningful way as their BABIP is actually higher at home than it is on the road so far. I will continue to do some digging here as there are potentially interesting splits to be found league-wide, but as for now, I am puzzled. Unless I am missing something, Occam's razor would lead me to state that the Mariners actually have one of baseball's best team defenses.