The best measure that we currently have states that a pitcher's ground ball rate begins to become reliable at around 150 batters faced. Jason Vargas has faced 149 batters so far in 2011 so I suppose this post will have to wait.

That's great, but can we deduce why the ground ball rate has spiked? After all, if we can find a cause for the effect, and if that cause is repeatable, then we can feel more comfortable about the ground balls continuing into the future. The first possibility I looked into was whether Vargas had shifted his pitch location vertically. It's no surprise that the average ground ball comes from pitches located lower in the strike zone. That does not appear to be the motivating factor here however as Vargas' average pitch in 2011 is only marginally lower than in 2009 or 2010. Less than one inch of pitch height is not going to swing a ground ball rate this much.

A change in pitch selection can swing a ground ball rate this much and that is present in Vargas' case. 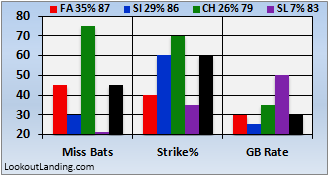 FanGraphs (which uses BIS data, more reliable on pitch types than MLBAM) shows Vargas at 19% sliders this season compared to 8% in 2009 and 2010. That's a big jump and part of an overall shying away from his fastball which is down to just 43% this season from the more normal range in the 60s previously. Vargas' fastball is poor at generating ground balls so from that specific perspective, this is a welcome development.

Using a hand count for reliability, I figure that the percentage of batted balls that have resulted from a Vargas slider has doubled from 7% last year to 14% this year. The rate of ground balls on his sliders has also increased, but we're looking at a sample of 16 balls in play. However, even if I regress his grounder rate on sliders to his 2009-present rate (the pitch itself hasn't changed much), the extra usage of it would have raised Vargas' ground ball rate last season about four whole points to 39%.

Coming into 2011, I was worried about Vargas' ability to continue being an asset in the rotation. While his FIP last season was a solid 3.95, that number was held down by a 6% HR/FB rate. His xFIP, 4.60, told the story that I fretted over. That 4.6 mark was below league average and perfectly in line with his 2009 season. I wasn't worried about Vargas getting blown up; we all micro-glanced at Doug Fister right there, but I did find it reasonable to expect Vargas to fall back into being a fringe AL starter.

Instead, Vargas' increased ground ball rate has contributed in lowering his xFIP down to 3.91. If he can maintain that, he advances out of the realm of useful innings soaker upper and pokes his funny head into the solid middle rotation group. A change in pitch frequency is certainly sustainable. It's up to the pitcher and catcher's choice after all. So long as the slider remains a viable Major League pitch, Vargas should keep making use of it. It's early, but like Fister and his curveball, Vargas might have actually done something real in his offseason planning.