Too common a refrain in the years past, Felix Hernandez's (or his catcher's) pitch selection has long been a bane of the Seattle blogosphere. He threw too many fastballs for our tastes given how awesome all his other pitches are. Hitters seemed in on the game or perhaps just had given up trying to hit anything else. Either way, they were sitting fastball and Felix was underperforming his once-in-a-generation skill level largely in part to something that struck us as easily correctable.

By and large, Felix has mollified that concern now with a combination of slightly more use of his offspeed pitches and improved command of his fastball. Not like we could stay mad at him forever anyways. However, one subset of his pitch selection still irked me throughout 2009. That was Felix's penchant for reverting to a fastball in 0-2 counts.* The 0-2 count is as favorable as it gets for a pitcher and given the repertoire available to Felix, I'm not sure that a hitter should see a fastball at anything above random chance. Instead, throughout 2009, Felix threw a fastball 67% of time in an 0-2 count. 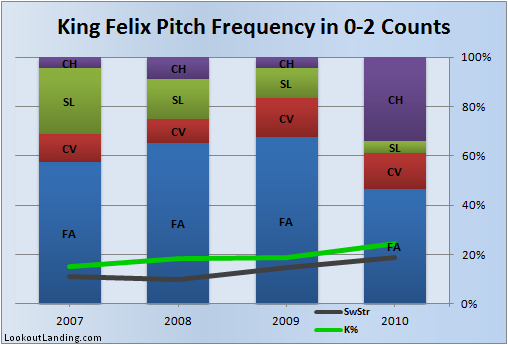 I am happy to point out that Felix appeared to take a vastly different path last season. Where before he rarely ever tossed an 0-2 change up at hitters, it comprised over one-third of his pitches in 2010. The immediate red flag raised for me is that distinguishing Felix's change up from his two-seamer can be difficult to impossible so I had to dig deeper into the data but after doing so I am confident that the algorithm is characterizing the change ups at an acceptably correct rate.

And for some good news regarding the effectiveness of such a change, you can see the slate and rave green lines charting Felix's swinging strike and strikeout rate on 0-2 pitches over time. Both took a nice jump in 2010 and nearly one-quarter of all of Felix's 0-2 pitches resulted in an immediate strikeout. Additionally, he got a swing and a miss on 19% of such pitches, up dramatically from 10% in 2008.

Intentional or not, if the data can be relied upon, Felix made a radical strategic shift after working an 0-2 count last year and it paid a significant dividend. I hope this wasn't lost on anyone at Safeco and perhaps might be compelling enough to nudge Felix even further toward trusting his magnificent breaking pitches.