Some Very Quick Thoughts On The Mariners' Walk-Off Win

Share All sharing options for: Some Very Quick Thoughts On The Mariners' Walk-Off Win

Once again, I didn't have time to follow along with today's M's game - which is just as well, because I also lacked the inclination - but there are just a few quick things I want to point out before moving on.

Firstly, here's Michael Saunders against Matt Belisle in the bottom of the ninth: 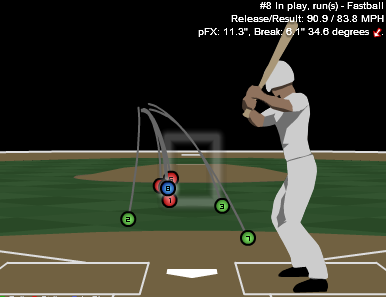 It's an eight-pitch at bat, with all five strikes being fastballs in the same low-away part of the zone that we've seen Saunders struggle with so much. Saunders took one, fouled off three others, and then laced the last into right field for a line drive single. Of course, what we've been looking for Saunders to do is hit those pitches hard the other way, but if he's actually able to pull things like this from time to time, then more power to him. He hasn't shown this plate coverage in the past, and if he's developing it now, then good things will happen.

Secondly, you have to feel good for Steven Baron. He homered in his first game of the spring, he hit a couple doubles off Felix Hernandez in a B game, and today after coming over from the minor league complex he stepped in against a quality big league reliever and drilled a walk-off single on a low fastball. Baron's still so very far from the Majors that he's looking at them through a telescope, but I don't know that any other player is going to leave camp with as much confidence as he will.

And fourthly, one can't help but notice that Chone Figgins is batting .396. Figgins batted .364 before his good 2007, .315 before his bad 2008, .380 before his good 2009, and .254 before his bad 2010. Do we take his success this March as a sign that he's going to get back to being productive? No, no no no no no no. No, we don't. Don't be that guy. We just take his success this March to be encouraging. Even given all the countless limitations when it comes to interpreting Spring Training statistics, you'd still always rather a player have a good spring than a bad one, and Figgins has been terrific. Not only has he swung the bat, but he's played well in the field and he's drawn six walks against just two strikeouts. Figgins is ready, and if he actually decides to hit the season, the Mariners might hit this season.