And with the passage of time, glacial erosion continues to eat away at the looser surface of the pile and expose the solid, rocky core. Larry LaRue lists today's five re-assignments:

Dustin Ackley. Ackley's the one guy here who's on the 40-man roster, and he's been optioned to AAA. This move doesn't come as a surprise, nor should it be taken as a sign that the Mariners are in any way displeased with Ackley's progress. He's done a lot of good work and he showed Major League discipline in his Spring Training trial. He's just returning to Tacoma to work on his defense around the bag, and once it's determined that he's good enough, or once something happens to the big league middle infield, he'll come on up and own some fools.

Gabe Gross. Gross was brought in to compete with Jody Gerut and Ryan Langerhans for a possible backup outfielder spot. He responded by going 2-26, making him look like a worse option than Langerhans, who's gone 12-36, and Gerut, who's retired. Gross may stick in Tacoma, or he may not, but with Langerhans already around, he's redundant. It was a nice thought, at least.

Steven Baron. Baron was obviously never going to make this team and he was mainly just in camp because the coaches needed catchers to catch all the pitchers, but he departs having batted a team-leading .545, so wherever he goes to start the year he's probably going to get a lot of sweet tail.

Fabio Castro. And so it appears that Royce Ring has won a bullpen lefty job. He'll join Aaron Laffey as left-handed Mariner relievers we stand a good chance of having forgotten about come August. Castro and Ring were competing for the spot, but I guess the team prefers Ring's sidearm delivery and limited but superior Major League experience. Castro should report to Tacoma and become the littlest Rainier, which isn't a thing, but will be.

Sean Kazmar. Indeed, that strikeout yesterday seems to have sealed Kazmar's fate. Kazmar has appeared in two more games than any other Mariner all spring, and while he only picked up three hits, he's nevertheless made a lasting impression as a guy who came out of nowhere to play every position at once at least two times a day. With Kazmar shipping out, the Mariners are petitioning the commissioner to reduce their remaining Cactus League games to five innings.

We'll probably never see you again, Sean Kazmar, but I thank you for all the memories. You've given me more than many. May your Mike Brumley jersey keep you warm on many a cool Tacoma night. 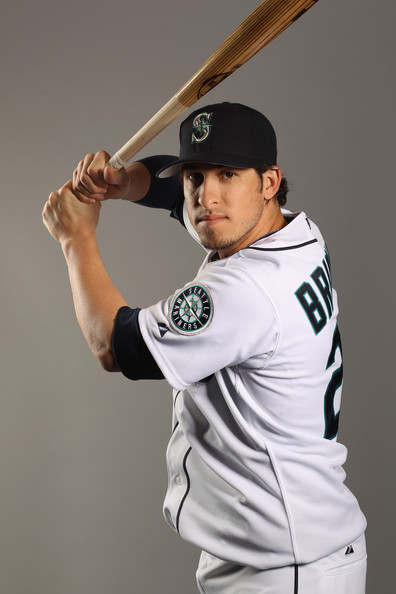