Share All sharing options for: Graph: Mariner Game Lengths in 2010 By Starting Pitcher

I love data. Like physically love it. Not literally physically love data though. "Like" physically love data. One of the things I adore about it is that it's testable. I can have a thought or an idea and instead of writing that up like so many others, I can turn to my beloved data and find out if it's true or not. And the great part is that even if it's not, it's a story, but it's a story with facts instead of unsupported claims. Don't you enjoy facts? I enjoy facts. I most enjoy them in the morning, but here are some evening facts for dessert. Don't tell the missus. 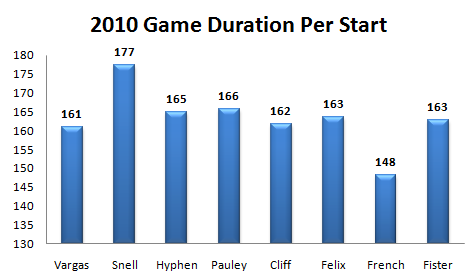 I was curious about Cliff Lee as I often am and today's curiosity happened to coincide with some data I was pulling for someone else about game lengths over time. I had written about this before, but revisiting the subject reminded me that it was time to update it with 2010 data. And then whammo, the two thoughts collided in a blinding release of energy that could only be properly described as euphoric. I could chart out how long the average Mariner game took in 2010 for each of our starting pitchers!

I though Cliff would blow this one away, but it turns out that no, he didn't. In a perhaps shocking (I haven't looked at other teams yet) display of solidarity, all but two starters averaged between 161 and 166 minutes per start last season. The two outliers are the two with the fewest starts, but I think we can all express confidence that no matter how many starts he got, Ian Snell was going to be right where he is.

However, Luke French is the real surprise here. Over his 13 starts, his games lasted an average of about 15 minutes less than anyone else. That is just over three extra hours you have in your life due to Luke French. I hope you take time during tomorrow's start to thank him for it.