On August 8th, 2008, Graham made an excellent post titled Biomechanics and You. It was aimed - more or less - at amateur "biomechanical" analysis done by writers like... well, me.

The point is really that I'm not convinced we can just take all the injury predictions that analysts are throwing up online at face value. I don't think I could come anywhere near injury predictions within the next few years, and I'm supposed to be an expert on it. Maybe I'm just stupid, but I'd say it's more likely that we should all be taking commentary on pitching mechanics and their relationship to injury with a boulder of salt.

I enjoyed the article and even linked to it on my now-defunct SB Nation blog, Driveline Mechanics. A healthy dose of skepticism is a very good thing. I tried to make it clear that my thoughts on pitching mechanics were unscientific thoughts with what I thought were interesting theories about pitching based on my knowledge of exercise science and kinesiology. However, that didn't stop a lot of people from taking my word as gospel (despite repeated statements from me spelling out the opposite), and I grew uncomfortable with my blog and the fuzzy mission statement that came with it. So, I stopped blogging, and eventually the blog was moved offline by SBN superiors.

Even prior to Graham's post, I had been working on building a low-cost biomechanical analysis laboratory in Seattle. For those unaware, high-speed cameras were basically unavailable at reasonable price points in 2008 until the Casio Exilim EX-F1 came out for $1000. Even then, these cameras weren't enough to do the advanced biomechanical analysis required to even shine a light on the "mechanics" of throwing a baseball. It would require multiple cameras, off-the-shelf software that could solve for kinematics/kinetics (and provide a digitization solution), custom algorithms that could solve the synchronization issue between these consumer-grade cameras (commercial ones do this automatically), and a precisely measured control object.

Commercial packages are available, but cost $15-17k for a two-camera setup that is not sufficient for working with movements that occur in all three planes so rapidly - like baseball pitching. You're looking at $25-30k at the bare minimum with off-the-shelf packages, plus customization and training.

Well, I don't have that kind of money, so I took the former route. For the last three years, I've been developing a low-cost solution with a research assistant from the University of Washington (plus two more Mathematics and Kinesiology interns/assistants from local schools on the way). Matthew Wagshol and I have been spending much of our free time scouring texts from the UW library, doing tons of trial filming (most of it fruitless), and building weird PVC structures inside the Home Depot on Aurora Ave: 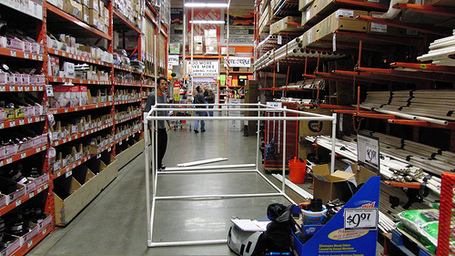 We managed to assemble this thing at our Lake City facility. We precisely measured it, taking about 6 hours to do so. And... we had to cut it down and remeasure it a few weeks later because it was too large. 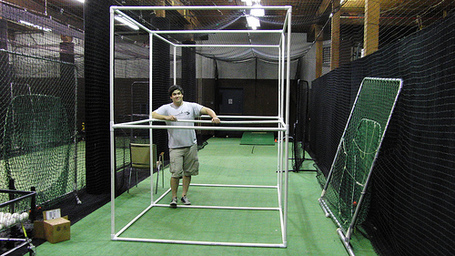 We started filming trials using the control object and two cameras as a test. And... we got some pretty interesting results that matched the commercial labs out there!

Now, it's not perfect, but we're getting closer with every trial we shoot. We've added a third camera and some better processes on how to digitize these files in our software. (Think 1 click on each body segment per frame, 22 body segments, 120 frames per video, 3 cameras...) And kinematic values like Maximum Shoulder External Rotation Angular Velocity and solving for Maximum Shoulder Horizontal Abduction/Adduction static values has been done. Kinetics are up next - the joint loads on the shoulder and elbow, specifically. This poses another set of interesting problems, but I'm already going on and on about an esoteric subject.

Before I made this post, I emailed Jeff to see if the readers might find this type of stuff interesting - and based on the popularity of Graham's post (and my former blog), it seems like there is some interest. So, I wanted to share with everyone what work I've been doing that you could actually call biomechanical analysis. No, I don't have an undergraduate degree in kinesiology, biomechanics, or even a hard science degree (I studied Computer Science and Economics), but I've read at least 10 full academic texts on biomechanics/kinesiology and more research papers on the subject that I care to count (at least 50, probably far more). I've talked to the subject matter experts (Dr. Murray Maitland and Dr. Kevin McQuade at the University of Washington's Human Motion Analysis Laboratory, Dr. Glenn Fleisig and Dave Fortenbaugh at American Sports Medicine Institute, and various other biomechanists/kinesiologists out there) to learn more about the industry and the best practices for performing research. My research assistant worked in the University of Florida's biomechanics lab, so he brings some practical experience with him.

But the truth is that what we're doing is much more difficult than buying a commercial product and simply doing some basic research. We're trying to bring true three-dimensional biomechanical analysis services to the public at low costs - and not just the service, but the product itself. Coaches and trainers out there should have access to this valuable technology, and at its current price point, it is simply impossible to afford. Our dream is to set up a reliable laboratory for under $1,000, and I strongly believe this is possible given the plunge in prices for consumer-grade high-speed cameras (you can get the Casio Exilim EX-F10 for $100 today).

And we want people to get excited about it. We're operating at a huge loss - which is fine - and we don't expect to get rich off this. But it's something that's always interested me, dating back to my arm injuries and pain as a youth athlete with no real answers to it. So if you're in the Seattle area and want to drop by to check it out, please shoot me an email (kyle@drivelinebaseball.com). We're open most weekday nights and almost anytime on the weekends, and we'd love to show you around. It's just the basement of a warehouse with a few batting cages and a training facility, but it's our home - or it might as well be, given how much time I spend there.

Thanks. I'd love to answer any questions or comments you might have.

EDIT: Interestingly enough, the linked post about Tim Tebow's work in a lab at UF is the same lab Matthew worked at.