Four Things To Take Away From Last Night's Loss

Share All sharing options for: Four Things To Take Away From Last Night's Loss

I don't say that to worry you. Just the opposite, actually. Felix got lit up by the Royals, allowing six runs on 11 baserunners in four innings. But after the game he said he felt strong, and you get the sense that he's ready for the games to start mattering. That he struck out seven guys shows you the stuff is there, but between last night and some of his other appearances, his focus isn't quite where we're used to seeing it during the season. It'll get there. Remember that he walked seven guys in 12.2 innings last spring before having an awesome April. Felix just isn't Felix right now, because he doesn't need to be.

Spring Training is interesting. For some guys, it's practice. For other guys, it's a heated competition. I'm not going to pay super close attention to how, say, Felix or Chone Figgins perform, because they're just getting strong and loose. But Michael Pineda? The bullpen pile? Those performances are more worthy of our attention, because those players are playing for something. If any Spring Training stats have value, it'll be the stats put up by the guys fighting for a spot, because they'll be going at or near 100%.

The Rule 5 pick has only made four Cactus League appearances, and last night was his first in ten days. He only threw ten strikes out of 27 pitches, walking three of the five batters he faced and going to three-ball counts on the other two. He only threw one offspeed pitch for a strike. The Mariners are going to need to start clearing space on their 40-man roster to make room for some of the NRIs, and it seems to me that Flores is a likely casualty. As so many of these players usually are.

(3) The Mariners may be sick of Spring Training.

Baker wrote last night about how the Mariners may have hit the lackadaisical stage of Spring Training, and Eric Wedge called their performance "sloppy". There are a lot of problems that professional athletes go through that I can't relate to or understand. This is not one of them.

(4) This is the most Spring Training at bat of all time.

I left the Gameday window open on my computer when I went out for the night and when I came home, this is what was staring me in the face: 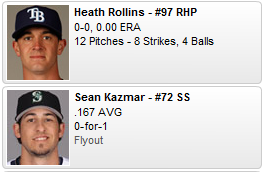 Two guys whose numbers add up to 169. On the Mariners' side, we have Sean Kazmar, who doesn't stand any chance of making this team, but who has seen more ninth innings this March than Mariano Rivera has in his career. And on the opposing side, we have Heath Rollins, a pitcher I've never heard of wearing the hat of a team we weren't playing. All the elements are there. It's perfect.

Jason Vargas and Daniel Hudson this afternoon as we revert to the 1:05pm day game schedule. And this one's on TV! Televised baseball!