We are familiar that the starting first baseman (Richie Sexson) and designated hitter (Jose Vidro) for the 2008 Mariner team never again played Major League ball after the 2008 season. Generally, having players on your team that retire by the end of the season is a bad sign. Good players tend not to retire. Originally I was interested in if any other Mariners from that 2008 team suffered the same fate. Upon investigating it however, I found few others.

What I did find though was that quite a few players got a handful of trips to the plate in 2009, proved they were finished, and then were done. With that in mind, I compiled a list of the players who batted for the 2008 Mariners and then recorded no plate appearances at all in the 2010 season. 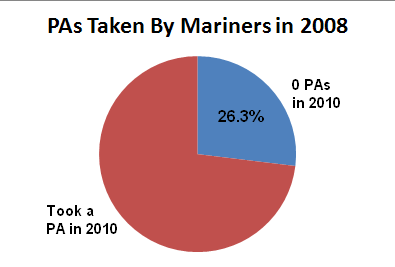 Over one quarter of the plate appearances taken by the Mariners in 2008 went to players that were absent from the Major Leagues a mere two seasons later. What percentage do you think the 2010 Mariners are going to face after 2012? Would it surprise you if it eclipses 50%? Not me.