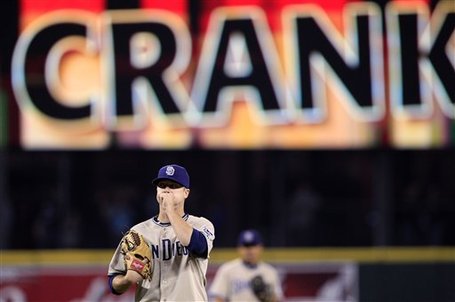 Late last May, I saved this picture to my desktop. I remember I didn't have any idea what to do with it at the time, but it was such an unusual picture that I was supremely confident that I would get an idea soon, and the idea would be a winner. Wade LeBlanc blowing on his hand as he got trounced by the Mariners while the new LED scoreboard behind him screamed "CRANK" in ten-foot letters? While taking a walk a few months ago, Ms. Jeff picked up a small wooden structure off the sidewalk and brought it home, figuring we could find a use. We use it now to hold bottles. I saved this picture, assuming it would soon thereafter serve a purpose.

It never served a purpose. So here I am now, throwing it out there anyway just because I hate seeing potentially useful things go to waste. Maybe one of you will like it and print it. Maybe posting it on the front page with pointless commentary underneath is enough. Whatever the case, I can delete it from my desktop, now. No longer must I struggle with the sense that I'm missing a golden opportunity.

My only thought of any real substance is this: last season, the Mariners were one of the very worst offensive teams in the past 50 years. The Padres, meanwhile, were among the very best at run prevention. And on May 21st, the Mariners scored 15 runs, and had a seven-run second, and a five-run fourth, and Mike Sweeney went 4-5 with two dingers, and Cliff Lee allowed eight runs in 6.1 innings while earning the win, and Safeco's phenomenal new LED scoreboard urged those in attendance with bright flashing letters to abuse low-purity crystal meth. Given the context, this may have been the most surreal picture of the year.