Share All sharing options for: Three Years Ago Today 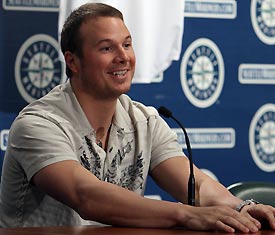 SEATTLE -- After several weeks of talks, followed by a period of patience, the Mariners solidified their revamped starting rotation on Friday afternoon by announcing the completion of a trade for left-hander Erik Bedard.

What's interesting about the Erik Bedard trade is that, as more and more time has passed, popular opinion of the deal has grown more and more negative, while the trade itself looks less and less like the disaster it could've been.

Ask someone now and the nuance is gone. The Bedard trade was a nightmare. Maybe Bavasi's biggest nightmare. Five guys? The Mariners traded five guys for a fragile flower of a man when they weren't particularly close to being a contender? That's stupid. That's a stupid thing to do, and it set the organization back.

And to be sure, it wasn't very smart at the time, and Bedard's hardly made Bavasi look like a genius ever since, having missed so many starts and undergone so many operations. The deal certainly still looks like a total bomb.

But look at the other side. Adam Jones is okay, but that's it. He has yet to reach the next level. Chris Tillman's been miserable over 23 big league starts. George Sherrill's just about out of the league. Tony Butler underwent shoulder surgery and hasn't progressed at all. And Kam Mickolio looks like he could be useful, but only as a short-inning reliever with inconsistent command.

It's impossible to say how any of these guys might've developed with the Mariners, and please don't take this to be a defense of Bavasi's decision. His decision at the time was a bad one - the result of a significant miscalculation of team talent - and that's what matters. But this hasn't exactly worked out like the Expos getting Bartolo Colon. While we can't be thrilled with our side of the deal, the O's can't be, either. They received what's ended up a fairly disappointing package.

So it's weird the way people have trended towards the extreme with the passage of time. There's not a lot to regret, here. The M's didn't lose any studs. Bedard getting hurt didn't make the difference between sitting at home and making the playoffs. If anything, we should be relieved that Bavasi's error didn't come back to bite us too hard in a delicate area. He made a mistake, but the organization survived.

And on top of that, while Bedard hasn't been able to contribute much on the field, he's contributed in other ways. He's been entertaining. He's been a source of irrational hope. He's been loyal - far more loyal than you'd expect of a guy in his situation - and has with his actions demonstrated a commitment to helping the organization he's disappointed. Bedard's been a neat guy to have around.

For so many people, the weeks-long Bedard trade saga has lived in ever-increasing infamy. I understand the sentiment, but it really hasn't turned out that bad. The popular opinion seems to be doing the complete opposite of what it ought to.