Share All sharing options for: Graph: Mariners Team bRAA Over 2010

Spending the whole season doing series previews the way I do them pays off it turns out. Posting the team's aggregate hitting, fielding and pitching totals means that I have a record of them on a series-by-series level. Since I am always on the look out for potential graphs to make, this time series data seemed ripe for the picking.

I will go through them in order of my interest, but offense starts off since that was the thought that provoked the investigation in the first place. I measured hitting prowess by park-adjusted team wOBA, adjusted to runs with the standard formula.* The graph is of the team's cumulative batting runs compared to league average with a data point at the beginning of each new series. 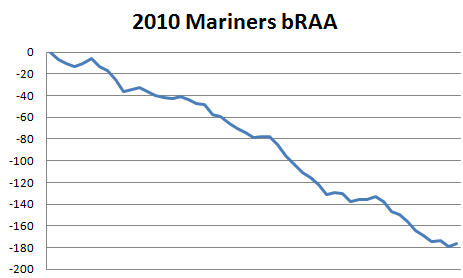 Unfortunately for installment one, the hitting, the Mariners did not present any interesting peaks or valleys. It is a rather pedestrian and nearly constant downward slope leading toward oblivion.

In a way though, that's fitting. The 2010 Mariner offense followed an unremarkable trend line, leaving me little to say about it. They were bad and determinedly consistent at being bad. Good riddance, 2010.