I find it utterly fascinating how conversations and thoughts progress. How sometimes you can be shooting the breeze with friends about the latest Mariner game and thirty minutes later in a heated discussion about the merits of hardcover versus paperback books. Then that peters out and leaves you with an awkward moment while you try to backtrack along the tangents to the original discussion thread. In today's culture, examining your Wikipedia history provides arguably the best example of this type of digression flow.

I was doing research for an upcoming piece about Doug Fister when I had the urge to include some graphs for visual spice, but nothing pertinent came to mind. As often happens when I reach a temporary roadblock, I let my mind wander and this time it found an occupation with various Excel graph types and finally honed in on pie charts. We don't present pie charts all that often here and suddenly I had a compulsion to find a use for one.

That led me to examining the Mariners payroll in 2010 and the idea of tracking each dollar spent. It quickly devolved into a struggle to find exact salary information on players nobody cares about and ended with a realization that tracking all the call ups, DFAs, trades and such was a daunting task that would take longer than my interest held out. Hence, the inclusion of estimated in the chart title below.

It's not estimated as in I totally wagged it. It's estimated as in some players who are club controlled made $406,000, some made $415,000 and I do not think the difference between the two is a level of detail worth exploring unless the information was right at hand. I did adjust the salaries for major transactions; Cliff Lee's salary is pro-rated for example. 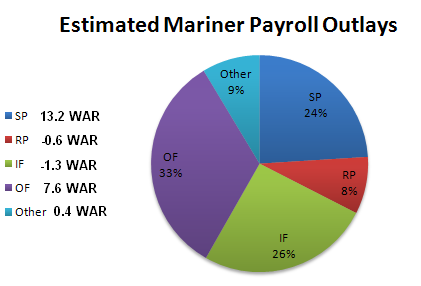 The "Other" category basically means DHs. It's where I stacked Ken Griffey Jr, Mike Sweeney, most of Russell Branyan and half of Milton Bradley. The WAR totals come from FanGraphs.

The Mariners payroll was listed at about $91 million for 2010, but they likely ended up spending less due to trades, retirements, deferrals and signing bonuses. I peg the actual expenditure somewhere around $85 million, so I would use that if you wanted to answer the question of the outfield being 33% of the payroll equals how much.

I doubt there's anything monumentally shocking contained here, but I found the compilation interesting. I would not have guessed the infield cost anywhere near the outfield. However, I would have guessed that they were awful.