On October 23, 2009, I penned* this post about Ichiro's depressed walk rate in 2009 and worsening contact rate on pitches in the strike zone. I commented that I would be paying attention to this in 2010 to see if it became a trend. With 2010 long in the books now, how about a look back?

*Literally. This is not well known but I write out all my LL posts in long hand with quill and ink and then send it via carrier pigeon to Bangladesh where a veritable army of low paid workers meticulously type it out and then send me back a digital copy via a third party company in South Korea which I then paste into our story editor. This used to be Trent's job until I outsourced him.

On the first part, Ichiro's walk rate rebounded this past season. While he drew fewer intentional walks, it was not a significant drop. It might seem surprising for pitchers to intentionally walk Ichiro less often this past season since he was one of the few offensive talents on the team and there was no great threat looming on deck to punish them, but on the other look who was batting in front of him. Still, Ichiro's unintentional walk rate rose from just 2.5% in 2009 to 4.4% last year, a number more in line with his 2003-8 rates.

More below the jump including some pretty colors.

The contact numbers are more of a mixed bag as Ichiro Suzuki set a career high in strikeouts with 86, a marked jump over his previous high of 77 set during the 2007 season. The good news is that Ichiro's contact rate on pitches in the strike zone, what I was paying attention to as a possible cause for concern, came back to his established level of around 94% and he didn't lose much of anything on his contact rate on pitches outside the strike zone either.

The bad news is that Ichiro continued to swing at more pitches this season, topping 50% for just the second time in his career. Why he did so is anyone's guess but surely the Mariners' overall futility will be high on everyone's mind.

The problem for Ichiro is that while his rate of offering at pitches rose, the rate of pitches he saw in the strike zone fell. That's not an uncommon or even non-intuitive consequence, but as a result, Ichiro was swinging at many more pitches out of the zone than he used to. As a comparison for how much his swing pattern has changed, here are two heat maps, the first tracks the pitch location of his swings from the 2008 season and the second from the 2010 season. 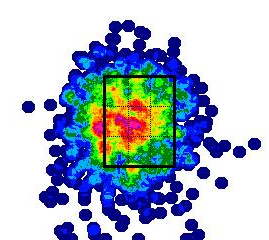 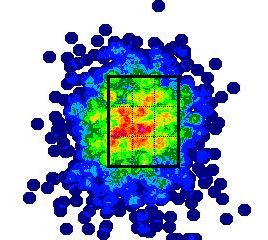 Ichiro's 2010 swing pattern is quite a bit more diffused than it was back in 2008. That is not good for all the obvious reasons concerning swinging at what are likely pitches destined to be called a ball. So while the two possible worries in 2010 did not manifest themselves, we have a new one for 2011, the rate at which Ichiro swings at pitches outside the strike zone. It's about the only sign of possible decline that I can find in his batting rates. If he can rein those in, we should see a reduction in his strikeouts and perhaps even a further rise in his walk rate or slugging percentage.