See the previous post, here, for some introductory material on where the data comes from.

Pitching-based runs against average (pRAA) is analogous to bRAA. It's calculated in much the same manner but uses tRA as the baseline. It takes the difference between the player's (or team's) tRA and the league's and then divides by 27 to put it on a per out scale. Multiplying by the number of expected outs recorded by the player (or team) then gives you the total difference in runs saved or allowed. 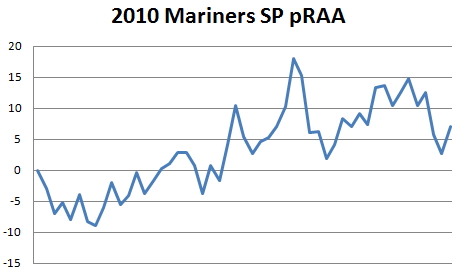 The absolute minimum corresponds to the point when Cliff Lee joined the rotation. It was all blue skies from there on out. The very noticeable peak equaling when Cliff Lee was traded would have made great symmetry and will obviously be portrayed that way when Jerry Bruckheimer makes his "based on true events" 2010 Mariners epic. However, it's not totally true as Cliff Lee was traded about midway up the slope to that peak. Roughly around where the Western Cym would be.

It collapsed soon after, but would recover and limp toward the end of the season powered almost solely by Felix Hernandez.

The Mariners rotation was not the dominant force we had hopes for before the season began. It didn't implode like almost every other facet, but it did disappoint. Some of that was due to the soul saddening lack of time with Cliff Lee and some of that was due to the more predictable lack of time with Erik Bedard. Our nominal three (Ryan Rowland-Smith) and four (Ian Snell) starters having bad years played a major part as well. At its best, the rotation ranked 11th in pRAA. At its worst, 26th.

On the whole though, it averaged about where it finished the year, 16th to 18th. When below average is your second best unit, that's a mark of an unfortunate season.