A Problem With Manny Delcarmen

Share All sharing options for: A Problem With Manny Delcarmen

There are, I suspect, many problems with Manny Delcarmen. Generally, a player doesn't decline to the degree that Manny Delcarmen has declined with just one thing being wrong, unless that one thing is severe, like an injured shoulder, or SARS. But here, I'm going to highlight one thing and one thing only.

All right, but that's just OPS against. That shouldn't be a statistic of choice for any pitcher, nevermind a reliever. So let's dig a little deeper:

His walk rate against righties has shot up as well, such that his K/BB ratio has taken a complete nosedive. In 2007, Delcarmen's K/BB against righties was 4.3. Last year, it was a pinch under 1. This is about as alarming as it gets.

Going into the numbers, we see that, over the past two years, Delcarmen hasn't thrown as many strikes with his curveball or changeup. That's definitely a contributing factor. But two-thirds of his pitches to righties are fastballs. And here, we see a steep decline in effectiveness.

Delcarmen hasn't been able to throw nearly as many strikes with his fastball as he used to, and it's also been considerably more hittable. Over the past two years, he's averaged half the whiffs he generated in 2008. That's eye-poppingly bad.

Part of the problem, I imagine, is that, according to PITCHfx, his fastball has lost more than two ticks. He's down from 96.1mph to 93.7mph, and while 93.7mph still makes for a good average fastball velocity, it's a little easier to hit. Without climbing back to his old velocity, Delcarmen's unlikely to ever climb back to his old level of effectiveness.

But I don't think velocity explains the whole decline. One notes that he averaged about 94mph between 2006-2007. I think location is another big factor, and Delcarmen's changed fastball location is readily evident in the images. First, the PITCHfx locations, courtesy of Texas Leaguers: 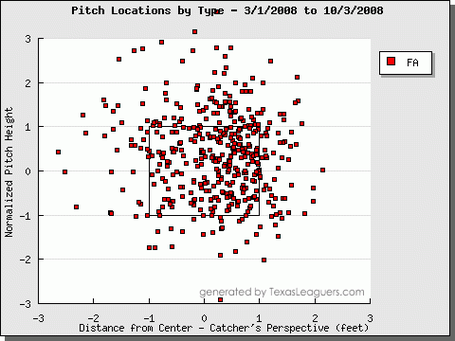 Manny Delcarmen fastballs to righty hitters, 2009-2010, from the catcher's perspective: 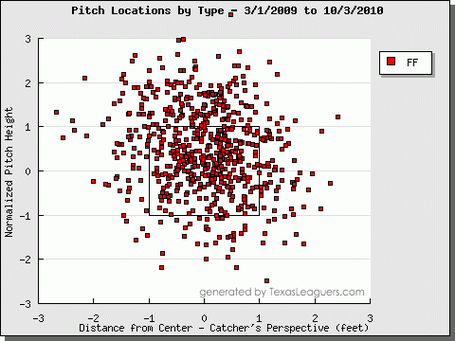 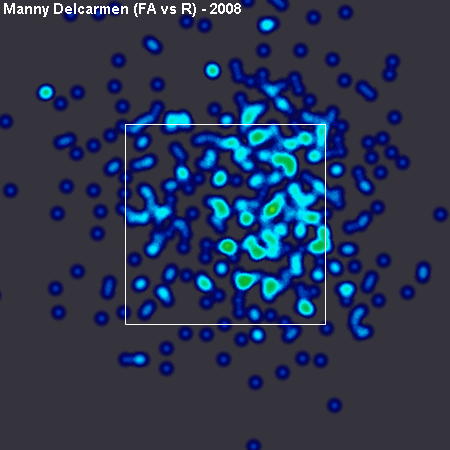 Manny Delcarmen fastballs to righty hitters, 2009, from the catcher's perspective: 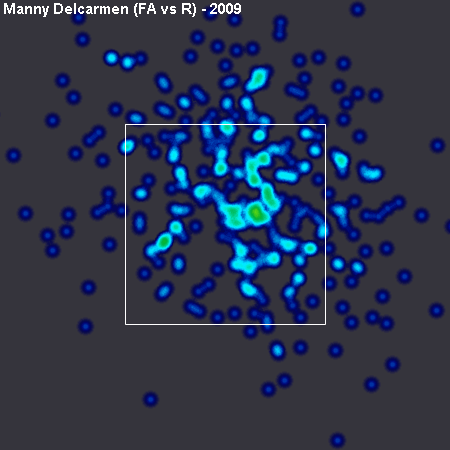 Manny Delcarmen fastballs to righty hitters, 2010, from the catcher's perspective: 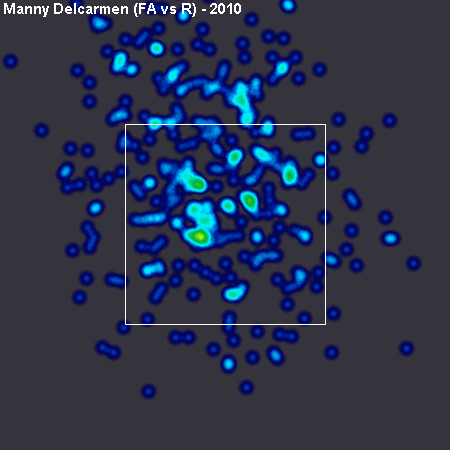 Back when he was a successful reliever in 2008, Delcarmen was able to pepper the outer half of the zone with his fastball. Since then, his heater has shifted over towards the middle, with predictable results: way fewer misses, and way more hard contact. Delcarmen, of course, doesn't mean to throw his fastball over the center of the plate, but his location's been off. Generally speaking, he's either thrown to the middle or missed the zone completely.

That's a problem, and until it's rectified, Delcarmen isn't going to get many outs. Me, I couldn't spot much of interest in his mechanics (2008 here, 2010 here), but this sure looks to be a mechanical issue, and I'm not a professional pitching coach. It's up to Carl Willis to identify what's wrong and get it smoothed out.

If Willis spots something, and we see Delcarmen hitting the outer half of the zone against righties in Spring Training, then there'll be reason to hope. There'll be a chance that he can rebound to being some approximation of what he was at his peak. If Willis can't spot something, and/or if Delcarmen looks like his same ineffective self, then I wouldn't expect him to be a member of the organization for very long. Righties who can't pitch to righties don't make for real useful righties.