A Whimper is Heard at the Departure of Jeff Mathis

Share All sharing options for: A Whimper is Heard at the Departure of Jeff Mathis

You maniacs! You blew it up! Damn you! First Jerry Dipoto goes and gets a respectable catcher for the Angels in Chris Iannetta. Now, in part two of the story, he has traded away Jeff Mathis to Toronto.

Once again, the Angels struck a deal involving a catcher with the Blue Jays but this time the Angels managed to avoid coming back with a big, really big, box of regret. Instead they get left-handed starter Brad Mills, who might become sort of the new Tyler Chatwood. I don't mean that the two share similar attributes, Mills is left-handed, tops out at about 88, was drafted out of college* and will be 27 while Chatwood's a younger righty who can accelerate the baseball to around 93 or 94. I mean that Brad Mills has been quite bad in the Majors so far.

*Mills actually completed his degree at college and it was a civil engineering degree, but it was at the University of Arizona so he gets accolades only here in the aside.

It's a very small 48 inning sample though and further split over three years between the rotation and bullpen. Incidentally, this was one of his starts last season. You might remember it. And this was one of his relief appearances in 2010, as part of this completely different sort of disappointment with the Mariners.* So we shouldn't act all smug in assurance that Brad Mills will be terrible. Another reason is that Mills has two extended stints in Triple-A the last couple of years and he's been quite good down there.

Mills so far is not, and given his age and development level probably will never be, good at limiting walks or getting grounders. What he has been able to do is get strikeouts. Odd for a pitcher with such a slow fastball, but according to the scouting he reportedly has a good changeup. That mix is fit to destroy the minors, but he may end up a Quad-A pitcher that just doesn't have enough zip to consistently get MLB hitters out. 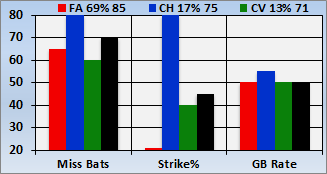 The Angels got a potentially useful depth pitcher who is under oodles of team control and managed to remove all possibility of another 300 Jeff Mathis plate appearances. This is a troubled day in Marinerland. The clouds are omnipresent, ominous and overcast. The sky shall soon weep as we do in our own depths. Stay gold, Jeffy, stay gold.