The Munenori Kawasaki Experience Is Coming To The Pacific Northwest

Share All sharing options for: The Munenori Kawasaki Experience Is Coming To The Pacific Northwest

You remember Munenori Kawasaki. He's the experienced Japanese shortstop who recently told the Japanese media that he wants to play in the Seattle Mariners organization, and only in the Seattle Mariners organization. It was notable because, generally speaking, that is a stupid thing to want. But Kawasaki and Ichiro get along super great, and the former wishes to play with the latter.

Well, as many of you have surely heard by now, word is that Kawasaki is in Seattle with his wife, who I'm given to believe is not an Ichiro Fathead mounted on plastic. (But I don't know.) The expectation is that, soon, or maybe after the holidays, Kawasaki will end up with a minor league contract. Kawasaki said that he'd be willing to accept a minor league contract, and that's the plan that makes the most sense right now.

As such, it looks like Kawasaki and the Mariners will avoid an awkward situation.

Of course, it was just the other day that Dave wrote at USS Mariner about how there's no evidence that superstars help teams lure other free agents. Here we have a free agent throwing himself at the Mariners specifically because of a superstar. Take that, Dave!

What to expect from Kawasaki? Not much. As we've talked about before, his offensive track record in Japan is unremarkable, and he's coming off a rough season, although most of the hitters in Japan are coming off a rough season. He's a slap hitter good for the occasional double, triple, or stolen base. His strength is supposed to be his defense, but it's hard to say. It's easy to see how Kawasaki could fit, but everybody will need to watch him first.

It's also easy to let your imagination get carried away. Over the past five seasons, Kawasaki has hit .295. A fairly empty .295, but still .295. Just imagine if he could do that here! And as a good defensive shortstop! He'd be incredibly valuable! I guess there's a chance, in that who knows, but international free agents can make people crazy. Assume that there's a reason Kawasaki hasn't generated headline news.

Kawasaki will get his contract before long, and then we'll see him in the spring. In the spring, he will play with Ichiro. If he's good enough, he will continue to play with Ichiro. If he's not, or if the organization wants to see how he does in Tacoma first, he will play with Carlos Peguero, who has met Ichiro before. Kawasaki could then earn a midseason promotion. If Kawasaki ends up actually worth a damn, I don't know what he'll do if Ichiro isn't back in 2013, but we'll cross those several bridges when we get to them. Still a lot of jungle ahead.

In closing, here's Munenori Kawasaki looking like a child detective. 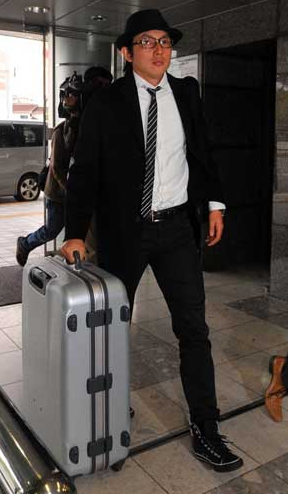