A byproduct of thinking so much about home runs in Cheney Stadium is that somehow I ended up curious about when during games home runs were most frequently hit. I don't recall why that got trapped in my mental black hole any more than I know why I am thinking so fervently about sandwiches as I write this now. It's making it difficult to concentrate. I shouldn't write near dinner time.

I constructed graphs for MLB as a whole so that I could write a post about it on FanGraphs and eventually have some anonymous troll claim that I'm exhibiting a bias against some team again. Also, I did it because the overall MLB rate is interesting to me. Y'all should totally go over to FanGraphs and check out the piece. I'll save y'all some time and suggest skipping the mayo and just looking at the second chart. Y'all might need to know what relative home run rate refers to (it's explained in the words), but really, the graph is what's memorable. The words are included mostly because we haven't yet evolved to where I can just post a graph and have people laud me. As if graphs don't actually take more effort than a similarly-sized paragraph of text. Your predisposition for size is showing.

I also created a special Mariner-related graph just for everyone. In that, I split off the Mariners from the rest of baseball. 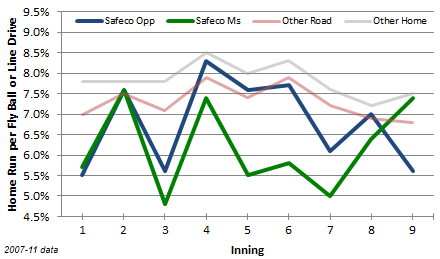 Here is the meta paragraph where I transcribe the graph's main points via text. It's like closed captioning or something. Across all innings, home teams in baseball ("Other Home") have a higher home run rate than road teams. Until the Mariners and their puny, weak offense get involved and that nice pattern goes away. The Mariners, aside from a small dill pickle in the first and a fair bit in the ninth, are out homered by those visiting punks.

Mariners' white bread slugging aside, road teams in Safeco struggle as well compared to in the other ballparks. The giant peak sprouting in the fourth inning is a bit hard to explain. I don't remember Anthony Vasquez ever making it that deep into a start. Anyways, the lesson is obvious if you're ever called on to participate in guessing the Mariners' home run inning and are disallowed from selecting "none of the above." Go with the second inning and a tuna melt.