I did this first for last year when I had an internal hypothesis growing from a feeling that Cliff Lee's games with the Seattle Mariners felt like they just flew by from a combination of his quick pace and outstanding performance. The surprise result was that Luke French, not Cliff Lee, was the outlier on the Mariners who was involved in the shortest average games.

I used the passive voice in that last sentence intentionally and I want to overtly stress that the average game time for a starting pitcher is not a performance metric. It's a curiosity only. 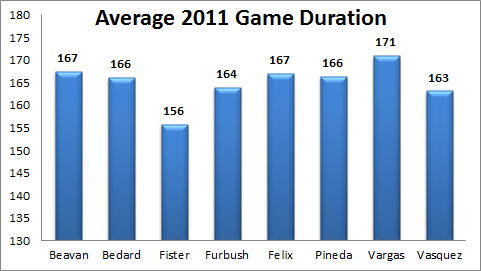 Unlike last season when Luke French stood out as a surprising outlier for being involved in short contests, and Cliff Lee failed to stand out, this slate of Mariner numbers offers nothing that I was unprepared to find. Doug Fister would not have been a unanimous pick for helming the quickest games on average, but my hunch is that he would have received the majority of guesses. Doug Fister's seasonal average of 160 minutes per start ended up ranking third, about 90 seconds behind John Danks.

On the other end of the scale is Josh Beckett and a 205-minute average game over his 30 starts. That wasn't just the longest of the long, it blew away others. While it is common for pitchers on the same team to huddle around similar lengths as shown above, and while the Boston Red Sox were the slowest team in baseball last season, Beckett deserves special recognition for his contributions to nights that were on average, ten minutes longer than anyone else in baseball.

It mildly surprises me how narrow of a band the pitchers on the same team fall between. For several reasons there is little relationship between a pitcher's individual quality and this game-based measurement, but the amount of pull that the entirety of the team has intrigues me. For example, Erik Bedard made 16 starts with the Mariners and those games averaged 166 minutes in length. He made eight starts with the Red Sox after being traded and despite roughly similar individual performances, his games with Boston averaged 202 minutes in length. Having an offense must feel so weird.

And because I was hip deep in that data already, here is the same axis grouped by teams instead of starting pitchers. This is information we already knew. Just consider it supplementary reference and proof of some above statements.