I remarked a couple times throughout the season how often the Seattle Mariners were facing right-handed starting pitchers compared to the league average. They finished with 121 games opposing right-handed starters versus 41 southpaws, a 75% split compared to 70% for the other 29 Major League Baseball teams. In part because of that and in part because of the general roster construction, the Mariners set a new mark this past 2011 season in left-handed batting. 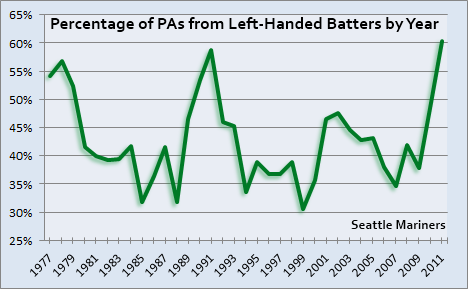 The 2011 Seattle Mariners had more plate appearances from a batter on the left side than any other incarnation in their franchise history. The Mariners had the second highest rate of left-handed at bats, barely ahead of the Boston Red Sox, but well behind the Cleveland Indians (at 65%). Despite the higher rate in facing right-handed starters, when looking at all match ups (that is, including relievers), the Mariners faced a righty 73% of the time, exactly in line with past history and the rest of the league.

Those comparisons fill in context to the graph, but they are impartial facts. They do not contain a judgment and that is how I prefer it. However uninteresting that makes this, I do not feel there is a right assessment to be made here. Is 60% good? Is it bad? Safeco Field certainly possesses some advantages for left-handed hitters. In a first-order analysis, it makes sense for the Mariners to work that angle, but it's not so simple. Nothing is.

A mere breakdown by dexterity states nothing about the quality of the plate appearances, which should probably be management's, and its fans, main concern. Additionally, balance is important so that the team reduces how vulnerable they are to countermeasures such as a particularly effective LOOGY and so that they do not over fit the team to Safeco Field where only half the games are played.

The rise from 2009 to 2011 could be the result of a conscious decision process by the front office. That would be worthy of interest and appraisal, but I lack the sort of access needed to make or verify such a claim. In its place, I do not offer a substitute conclusion to be drawn and I caution readers not to stretch finding one.

One aspect I did wonder about is how this might look next season. The graph above shows the numbers jumping seemingly at random from year to year but the 2012 season, as currently headed, will feature more Justin Smoak (less injury) and more Dustin Ackley. However, there are potentially fewer at bats going to Ichiro should he struggle again and almost certainly less playing time to be seen by Chone Figgins and Carlos Peguero. Jack Cust and Adam Kennedy are two lefty bats that saw significant playing time in 2011 and are no longer with the team, their positions already filled.

I did a mental rundown of how I think the at bats will break given the current roster trajectory and ended up with a guess of 50% toward left handers with a substantially-sized error bar in either direction. I think we'll see something similar to a platoon at first base, third base, left field and designated hitter. There are true lefties are at second and in right, but catcher, shortstop and centerfield will probably see very few left-handed at bats.

Ultimately, this is just a couple facts. It's not a complete story. But I like facts (and graphs!) regardless of whether they are shackled to a narrative. The Mariners saw a team record percentage of plate appearances taken by left-handers. Now you have hard and verifiable data which you can hang some of your memories and conceptions of the 2011 team on.