The Anaheim Angels continued being annoying today by swinging a trade with the Colorado Rockies for catcher Chris Iannetta and only parting with starter Tyler Chatwood in expense. The Angels' jealously over the positive press attention the Mariners were getting for acquiring John Jaso is obviously the cause. To our Mariner dismay, this might signal a forthcoming significant decrease in how often Jeff Mathis plays.

On Iannetta, the right-handed will-be-29 catcher has been a roughly league average hitter who is willing to be selective at the plate, does have some power, but mediocre contact rates. Defensively he has been a poster child for league average in blocking pitches and nabbing base stealers, but Mike Fast did rate him poorly on framing pitches. Iannetta ended up slightly worse than Mike Napoli for what it's worth. His contract is through this upcoming season for $3.5 million and then has a (now) player voidable team option for $5 million or he'll enter free agency.

It's also a sad moment that Tyler Chatwood passes out of the realm of Angels starters. Chatwood, who issued as many free passes as he did strike outs last season, is still young and could refine into a valuable piece in the future but his present skillset is downright awful. I consider it a bad sign when a pitcher has walk problems and is so reliant (75% of pitches) on his fastball. 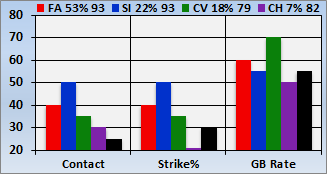 The Rockies will have Chatwood under club control for a long time (six years still left) should they end up wanting it. The Angels may end up with Iannetta only for 2012 since he can opt out. On that angle, this isn't that miffing from a Seattle perspective long term. It makes the Angels better for this season and probably only this season. I just wish it had cost them more than Anaheim's faster throwing, but right-handed Aaron Laffey.