Luis Rodriguez outrighted by Mariners, opts for free agency. 40-man roster now at 36. Adds to roster to come Nov. 18 ahead of Rule 5 draft.

As with David Aardsma, with whom the same thing happened, this doesn't mean that Rodriguez absolutely won't be back next season. It means he probably won't be back next season, as he's free to negotiate with all 30 organizations now, and I don't need to spell out for you the appeal of a 31-year-old bat-first utility infielder with a .638 career OPS. Guys like Luis Rodriguez don't just grow on trees. I'm serious. Look around, at trees. You won't spot a Luis Rodriguez in any of them, unless Luis Rodriguez happens to be climbing a tree.

Rodriguez got himself some attention last winter because the previous season, with triple-A Charlotte, he had more walks than strikeouts, and he slugged .493 with 16 home runs. It looked as if he might've broken out, and his hitting coach with Charlotte just happened to be Chris Chambliss. Of course, it turns out that Charlotte is home run-friendly to the extreme, but still, it was an interesting season from a guy capable of playing around the infield.

I think all of us were happy when Rodriguez ended up making the Mariners. He brought more upside than the six-foot rice cake in a Josh Wilson jersey, and it didn't take long for Rodriguez to make something of himself, capping off that huge comeback against the Blue Jays with a two-run single to the gap. That single came on the tenth pitch of an at bat in which Rodriguez had fallen behind 0-2, and I remember it vividly, even though I don't remember anything else from April or May, because at the time the Mariners were 2-7 and already I was prepared to check out. I was convinced I was in for another 152 games of shitty pointless baseball, and then the Mariners rallied and Rodriguez ripped the winner. That single pulled me back from the ledge.

Of course, Rodriguez wouldn't go on to do a whole lot else of note. He was a backup who lost his roster spot when Dustin Ackley descended from heaven, and though he returned and launched a walk-off homer against the Yankees in September, he finished with a .197/.299/.333 batting line. In terms of positive results, Rodriguez didn't provide that many.

I'll give him this, though - he usually looked good. He usually looked like he had a good approach at the plate. At least when he was batting left-handed. I was surprised when I reminded myself he switch-hits, because I have literally zero memories of Rodriguez batting righty. He did it 35 times. Nothing.

As a lefty, Rodriguez could work deep counts and fight off tough pitches. The bulk of his power was right down the line, and I don't think I've ever seen a guy pull so many foul line drives. I wanted to turn him to face the third baseman instead of the mound so more of those line drives would stay fair. Were I an opposing manager, I would've played a lefty Rodriguez like this: 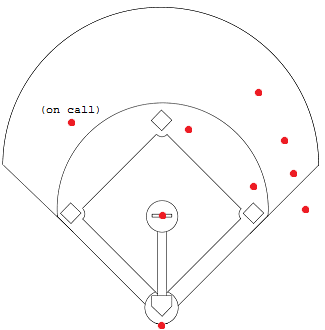 Maybe some of that was a fluke. It's hard to fake a good approach, but it's less hard to generate weird results, and Rodriguez finished with a BABIP sufficiently low as to suggest further upside. For a few reasons, I'd be open to the idea of bringing Rodriguez back as a bench guy or triple-A depth, because he's still a switch-hitting utility infielder who can draw a walk and knock the occasional double or homer. I'm convinced there's an interesting player in there.