SEATTLE - The Seattle Mariners unveiled a new logo on Wednesday that will be worn on the right sleeve of players' jerseys at the beginning of the upcoming year to commemorate the franchise completing the 12,776th day since their inaugural game on 6 April 1977. 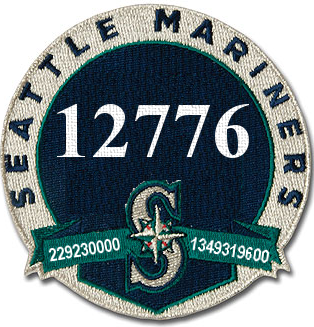 The logo utilizes the team's navy blue background color surrounding the number 12776, which lies above a banner depicting the datetimes of the Mariners first game back in 1977 and their last scheduled 2012 Regular Season game in POSIX time. The banner also includes the Mariners' compass symbol and letter 'S.'

The patch will be worn on the Mariners first game of the 2012 season, which will be in Tokyo 28 March 2012, beginning a two-game series against the Oakland Athletics. On the following night when the Mariners conclude the series, they will switch to a new logo that replaces the central 12776 number with a more up to date 12777 figure. Such changes will proceed in order throughout the entire 2012 season.

Asked why the club was choosing to celebrate days instead of years, Mariners President Chuck Armstrong responded, "well, it's only been 35 years since the team began. Who the hell celebrates a stupid number like 35? Now 12,776. There's a number with meaning. And 12,777? Who can forget that?"

The Mariners will conclude the 2012 Regular Season on October 3 and will again wear a special one-time patch, this time studded with an exclamation point added to the end of the prominent days counter in a show of pride and the special significance attached to semi-round numbers like 12,965. 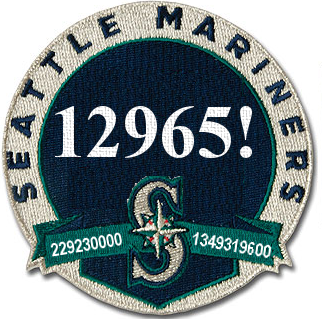 Chuck Armstrong declined to comment on what the team would wear should any games be delayed past October 3 or if the Mariners have similar plans for Spring Training or any possible playoff games.